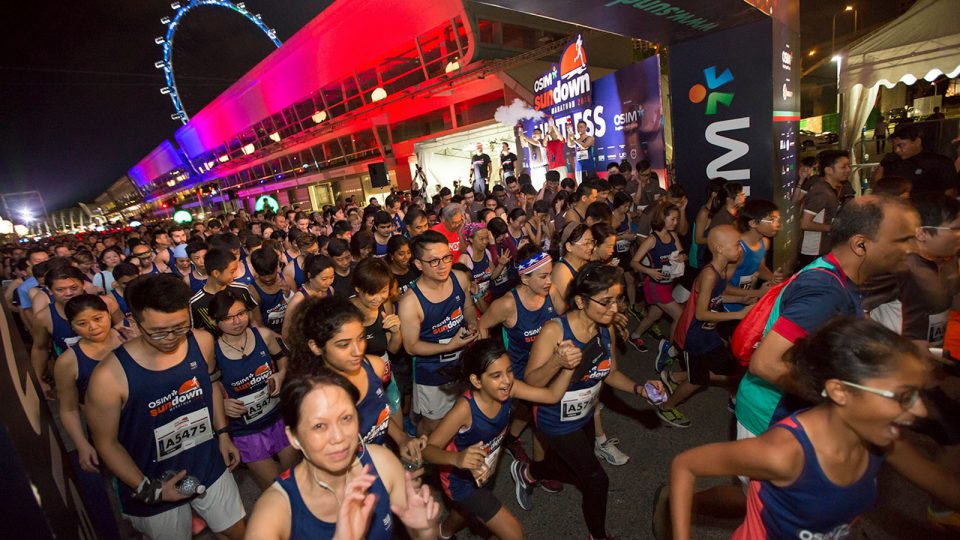 What’s so special about 2017? It happens to be the 10th anniversary of Singapore’s world-famous night running event: The Sundown Marathon. In just 10 years, this event has become a household name, accumulating history, lore and records while paralleling Singapore’s coming of age as a nation prioritising health and fitness.

We’ve searched archives seeking highs, lows and firsts to urge you to be on hand for the anniversary run on 25th March 2017. Sure, you could sleep through it — but why wouldn’t you want to be part of his history-making marathon’s amazing story?

According to the “Encyclopedia Britannica”, the year 2008 in Singapore “would be remembered as a year with more than its regular share of memorable events.” Three table tennis players took Olympic silver medals in Beijing and PM Lee Hsien Loong even delayed his state of the nation address so as not to interfere with his nation’s ability to watch this win!

Despite worldwide economics that brought most nations to their knees in 2008, Singapore and sponsor adidas looked past the fiscal international conundrum and instituted its first annual sport tourism event: The adidas Sundown Marathon.

Talk about symbiosis! Around 6,100 people signed up and as the world recovered from an economic slump, this marathon turned into a symbol of recovery.

What a difference a year makes! The adidas Sundown Marathon’s reputation exploded in 12 months, and the event was declared the region’s premier mass nighttime running event. Around 10,670 runners showed up to prove it. About 12-percent of runners came from overseas — particularly Africa — and the age span of runners at the start line was an impressive 18 to 72.

The women’s 10km proved wildly popular with 2,200 participants. To add to the excitement, organisers turned Sundown Festival Village into a grand and exciting party where food, beverages and fun for all ages brought families together despite the late hour.

Even though this year’s event had to be cut short due to overcrowding and problems with road closures, enthusiasm didn’t flag because organisers assured participants that the glitches would be remedied.

At this point in time, the Sundown was a part of the fabric of Singapore, offering opportunities for ordinary people to run the night away, test their stamina and bring home PBs courtesy of cooler temperatures and plenty of camaraderie.

Three years in, the Sundown also became a powerful vehicle for corporations looking for creative ways to bring employees together for morale and team-building.

Memories that ended the 2010 Sundown Marathon vanished by the time the 4th anniversary of this event arrived. The adidas name was no longer associated with the Sundown, but sponsors were in no short supply thanks to the marathon’s huge reputation that now sprawled across continents.

Race highlights ran the gamut from comical to historic: this was the year Willy Kepkemoi Rotich beat all competitors to the finish line, collected his first prize and was then summarily disqualified for wearing someone else’s race bib number!

Cautious about 2010 road and crowd issues, this year’s logistics were expertly organised in advance of the flag off that attracted more than 20,000 runners. This year’s event was a true all-nighter, starting at 3:30 p.m. on Saturday afternoon and wrapping up at 8 a.m. the following morning. To spice up the event menu, Sundown’s 84km ultra was scuttled to make way for a more daunting 100km event.

By year 5, Sundown Marathon organisers were on sure footing and the committee picked an electric theme for the event that upped the ante for athletes who might be hesitant to give up a good night’s sleep to pursue a win: “Light up the City!” How does this theme differ from previous ones?

For starters, there was no theme associated with premier event in 2008 and when a slogan was picked for 2009, “Race the night” stated the obvious. The 2010 theme proved longer: “Beat the sunrise; Race the night.”

In 2011, “Sleep can wait; Beat the sunrise” became the longer theme of choice, so when “Light up the City” was announced, even the name was a departure from the norm. A shocked Susan Arbuthnott had no clue that she had won the women’s division in 3:23:02 until a fan gave her the news. Despite the drenching downpour for which the Sundown Marathon 2012 may still be remembered, Alex Ong sprinted past the finish line with a smart timing of 03:03:28.

The world’s financial health was mending by the time horns signalled the start of the 6th Sundown Marathon 2013, sending a message of diversity and understanding by giving this year’s run the clever theme, “Show Your True Colours.” Brit Stuart Haynes pulled off a bit of magic with a 02:45:09 finish ahead of an impressive 30,000 competitors. Due to the dramatic increase in participants, organisers extended the event to two days.

Runners chased the moon down from the F1 pit to show their true colours. Did moving the race from the Changi Exhibition Centre to the F1 pit make things a bit easier to control?

In fact, plenty of local runners and those coming to Singapore from other nations celebrated not just the new route but the inexpensive, ample parking available throughout the area, according to blogger Isaac Loo, whose passion for running is only exceeded by his love of cycling.

If you believe that #7 is lucky, perhaps you ran your own PB at Sundown Marathon 2014. Themed “Bring on the Night,” participants again ran a re-configured route that included the Benjamin Sheares Bridge. Erring on the side of caution, organisers even addressed the subject of uneven ground at Marina Barrage, so extra marshals were situated along the well-lit and marked route for everyone’s safety as 30,000 runners explored the new circuit.

In addition to the new route, competitors were treated to “Glow Zones” that popped up unexpectedly along select stretches of the route. Those unexpected splashes of neon lights made for an abrupt wake-up call should anyone be tempted to nod off.

After a Brit won the 2013 Sundown, it was time for the U.S.A. to claim the title, which is how Russell Ericksen, with a finish time of 03:03:00, managed to bring the prize across the Pacific.

A major organisational overhaul was undertaken by organisers when it was announced that a new partnership had been forged with OSIM, Asia’s number one manufacturer of healthy lifestyle products. Perhaps the 2013 Sundown winner, Brit Stuart Haynes, beat his time by 5 minutes and took first prize again thanks to OSIM products giving him the edge he needed! Beating 26,000 runners to the finish line was no easy chore — with or without the help of the new brand’s association with the Sundown Marathon.

We would be remiss if we didn’t mention that the Sundown had developed a distinct pedigree by year 8, picking up accolades that included two International Sports Event Management and Marketing award nominations.

This was the first time a night race had earned the prestigious ISEM’s attention, reason enough to celebrate. Run under the banner of the 2015 theme, “Pulse of the Tribe,” the OSIM Sundown Marathon 2015 was fast becoming the standard-bearer of international night runs across the globe.

2016 OSIM Sundown Marathon and beyond!

With the named sponsorship of OSIM, the Sundown Marathon brand grew even stronger. To celebrate this fact, the entertainment and experiential bar was raised higher with the introduction of the Sundown Sports Zone. This epicentre of activity offered runners “adrenaline-pumping sports like dodge ball, basketball and rock climbing,” all of which ran throughout the night.

With the 2016 event’s “Limitless” theme, 27,500 runners from 55 nations showed up to uphold the tradition now enmeshed in the Singapore running community — which is why planning for the 10th anniversary spectacular, scheduled for 25th March 2017, has already been put on a fast track with limitless numbers of surprises in store for those eager to be part of the magic.

Registration for the OSIM Sundown Marathon 2017 is already open and Singapore is abuzz with rumours that as many as 35,000 contestants from all points of the globe could be on hand to set a few new records. Miss this one-of-a-kind experience and you may regret it — especially in light of the fact that the 2017 theme is “Sleep can wait” — because it really can!

What’s your most vivid Sundown Marathon memory? Did you fall in love? Set a PB? How about sharing your favourite Sundown recollection with us?