Meet the Pinoy-Sg Runners: A Club Dedicated to More Than Just Running 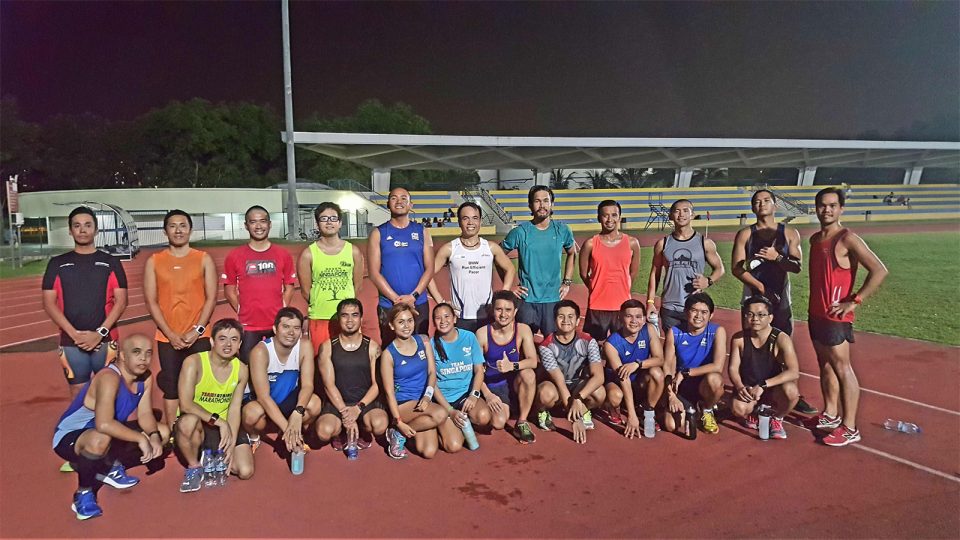 Interviewing more than one runner is no walk in the park — or in our case — a run through the park! Everyone’s got an opinion. But what’s unique about the Pinoy-Sg runners (PSR) is that despite the club’s relatively short history, members are so attuned to each other, one runner may finish another’s sentences.

No worries. We’re here for a story — the story of a group of individuals who at times think, act and perform as one. But isn’t that what clubs are for – to bring like-minded people together in the spirit of unification and common goals?

This story is about how one ethnic group created an atmosphere for runners from all walks of society!

RS: When was the PSR organised and how many members do you have?

Pinoy-Sg Runners: It seems like a much longer time, but we’ve only been together since 23rd February 2016. We started with six runners but the word got out and newcomers joined us almost every week until we numbered 93 by August! We’ve come so far in less than a year, people don’t believe it’s been just six months, and our cohesiveness is beautifully represented on their Instagram.

RS: Who started the group and why?

Pinoy-Sg Runners: Actually, a bunch of people were responsible for our startup after we were inspired by the Bible verse, Philippians 2:4, “Let each of you look out not only for his own interest, but also for the interest of others,” so you might say that our “mission” birthed the club organised by four members: Arnel, Jayson, Onin and Zel.

We picked our name on 8th March; everyone was eager to assume responsibilities. Now, Arnel leads conditioning and strengthening workouts, Jayson conducts our speed workouts and Onin and Zel, with support from the others, undertake all of the other administrative tasks. We are a well-oiled machine!

RS: Is there a mission or story behind the creation of PSR?

Pinoy-Sg Runners: There is. It all started when Arnel, who is as passionate about running as he is compassionate about his fellow runners, overheard Jayson complain that, “At the 33km point, or as early as 28km of a full marathon race, I get cramps.” He used the word “kisig” in the Filipino dialect.

Jayson wasn’t the only one in the Filipino community experiencing distress. Mark Joseph’s legs turned to jelly at 37 km, hindering his job as an official pacer for marathons.

Disturbed by similarities, Arnel used a Facebook chat group to further the conversation. Before he knew it, Arnel agreed to share his leg strengthening techniques. That led to the first Yio Chu Kang Stadium meetup and the rest is history.

RS: How do you approach your training schedule?

Pinoy-Sg Runners: We have been getting together at 7 p.m. every Tuesday at Yio Chu Kang Stadium, but in September, we’ll move our weekly conditioning to Wednesday so it aligns more closely with the marathon calendar.

Everyone is encouraged to be on time so they can be on hand for a regular five-minute talk, prayer and body loosening activity that takes about eight minutes.

Pinoy-Sg Runners: Then, the real work begins: A 15-minute warm-up run, 45-minute whole body exercise session that emphasises the lower body and core, and we finish with a 15-minute cool-down and stretch.

On the last Wednesday of the month we schedule a speed workout (e.g., interval training; YASO 800) and we also fit in a long distance run, usually on Saturday. And while we are serious and strict about our training, we have so much fun, it doesn’t feel like hard work.

RS: Are you still inviting people to join the fun?

Pinoy-Sg Runners: We love new members. The name of our group comes from a shared cultural relationship: Pinoy refers to Filipinos and Sg is for Singapore, but that doesn’t mean all of our members are from the Filipino community.

About 10-percent of our members are non-Filipino and runners of all ethnicities are encouraged to see if our group feels like a good fit for them. Once they decide to join us, we add their profiles and our family expands.

RS: It’s no secret that Singapore has plenty of running clubs. Why organise another one?

Pinoy-Sg Runners: No mystery here: most of us already belong to groups that focus on running, swimming, cycling and triathlon, but PSR focuses on conditioning and strengthening so our activities work to complement members’ other interests and programmes.

RS: Despite being a relatively new club to the Singapore running scene, can you share any achievements?

Pinoy-Sg Runners: We have built quite a fan club of prominent runners who flood us with mail thanking us for our willingness to help others with our conditioning training so they perform at a higher level. Recently we have 2 members who placed 1st in the relay category of the recent Bintan 70.3 IronMan and another member placed 2nd in his age category of the New Balance Run On 2016.

Every time these friends achieve a victory, so do we — we’re part of their success stories!

RS: How does the Singapore running community compare to the Philippines?

Pinoy-Sg Runners: There is no comparison! Runners in Singapore are privileged — so much of the city-state has been developed to give runners access. From pavement and park connectors designed for safe running to shower facilities and access to storage lockers, we can’t think of another nation that treats runners so well.

In the Philippines, there’s not as much focus on fitness and developing green space, which is why running is much bigger than in the Philippines. That stated, both nations are home to some of the most jovial, friendly people on the planet – and in the world of running, there are no “races.” There are just friends.

RS: Is there anything you can think of that would improve or otherwise change the Singapore running scene?

Pinoy-Sg Runners: We polled all of our members, and not one of them could come up with a single suggestion!

RS What does the future look like for the Pinoy-Sg Runners?

Pinoy-Sg Runners: We are quite the ambitious lot. Most of us would love to qualify for the Boston Marathon and if there’s any way we can make that happen, we will.

Individual future goals include continuing to set high performance bars and do so without being injured. Some of our members are fascinated with the subject of running research and intend to use it to improve our conditioning programmes.

RS: Is there more?

Pinoy-Sg Runners: A final futuristic hope is to become more engaged in charitable work as a group and individually. We all feel strongly that one of our most important jobs is to find ways to express our gratitude for the way members of our Filipino community have been welcomed and accepted here.

We may be far from home, but thanks to the open hearts and minds of the Singapore running community, we have a second home!

The Pinoy-Sg runners exemplify the way running has become a thread that ties people together from all walks of life. Can you think of other examples of running groups who have accomplished so much in so little time?

Here’s How the Keto Diet Helps You to Run Better