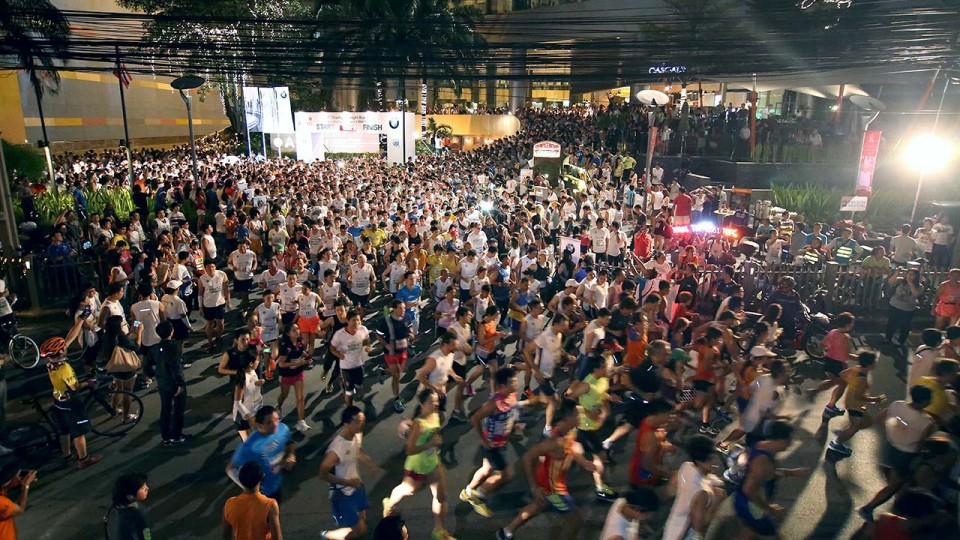 Midnight Race in the Streets of Bangkok!

Being the only race to be held at midnight in Bangkok, this charity run has become an annual institution, with the streets to be closed and protected by a police and security contingent of about 400 officers. This year’s race will take place on Saturday, 18 October 2014 and will have 6km and 12km race categories.

The famous hospitality of the Thais will also be on show here, with local residents and shop owners supporting the event alongside the management and staff of Amari Watergate Bangkok.

Arrive early and enjoy pre-race festivities, which include an aerobics warm-up. Join the 7,000 lucky runners who will get to see Bangkok’s streets in a whole new light at midnight.

To add to the fun run atmosphere, the race theme for 2014 is “Superheroes”. Dress up as your favourite superhero for a chance to be the best-dressed runner and win prizes.

Both male and female winners of the 12km event will also graciously receive the Royal Trophy of HRH Princess Sirindhorn. The winners of each age category, including the family team and the fancy team, will receive a trophy. Everyone who crosses the finishing line will receive a special commemorative medal. The management and staff of Amari Watergate Bangkok will celebrate with all the participants with a cocktail party afterwards at Henry J. Bean’s Bar & Grill, at which there will be a raffle with lots of prizes to be won!

Race Your Best and Make a Difference for 3 Charities

All proceeds from the event will go to three charitable causes; the Chalerm Prakiat School, which supports the education of children whose parents have passed away due to HIV infection; Baan Gerda, a children’s village project in Lopburi province that supports HIV-infected children; and Baht for a Better Life Project, a project dedicated to offering educational opportunities for underprivileged children in Bangkok and rural areas of Thailand. Thanks to runners’ support, the total amount raised from last year’s event was THB ฿4.6 million (approx. USD $144,790). Participants can gain entry with a donation of either THB ฿500 or THB ฿1,000. However, participants who make an entry donation of THB ฿1,000 will receive a complimentary running shirt and be entered in the grand raffle, with a chance to win domestic and international airline tickets, and many other fabulous prizes such as an Oris watch, and accommodation and dining gift vouchers from ONYX Group.

Don’t miss out on an amazing experience and take part for this exciting midnight run. Last year was a sellout, so book your place in the starting line now!