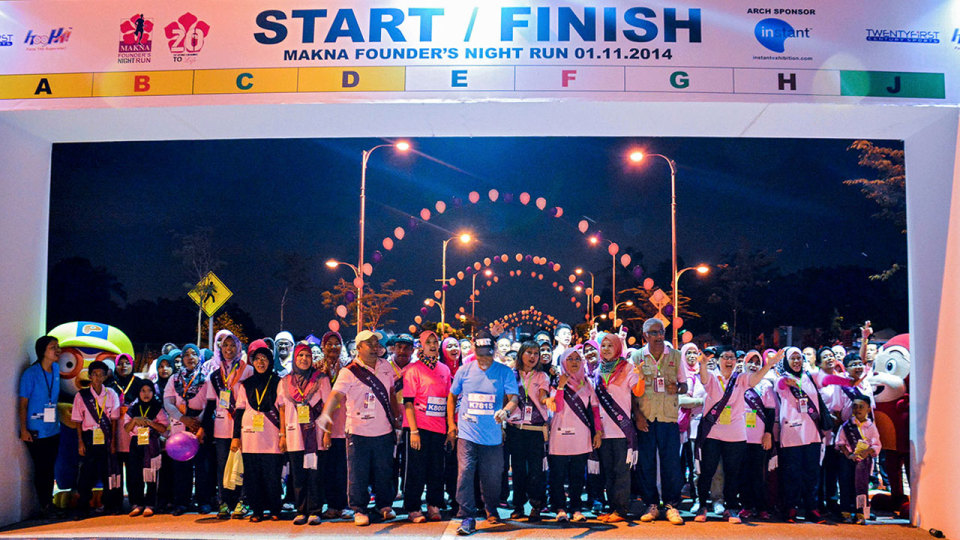 The MAKNA founder’s Night Run (MFNR) 2014 was held successfully for the second time on 7 November 2014, at the Water Sports Complex, Presint 6, Putrajaya in Kuala Lumpur, Malaysia. This year, the run registered 59% more runners than its first year with a total of more than 5,000.

Many participants not only completed the race but also ran the course enthusiastically in support of cancer patients they know or in memory of those who did not survive. The event mission of standing up against cancer has prompted many participants to sign up for the cause. For those who took part in the “Joy Run” and “Fancyfool Run”, they enjoyed the race by taking a leisurely stroll along the course to the finishing line. Some of the participants were on their roller blades, strollers, and skateboards, pushing prams and even in fancy dolled up costumes.

The race was joined by a group of cancer survivors and patients who received an ovation from the public and fellow participants for their never-give-up attitude.

We are extremely proud that MAKNA has grown up into a ‘young adult’ after struggling and coping for so many years, all the time trying our best to sustain our services and provide consistent, relevant and meaningful assistance to the cancer community and the Malaysian public for the past 20 years.

I envisioned the establishment of a non-profit of this kind after going through my family’s own episode confronting my late son’s (Farul Rafiq) own struggles with Leukemia but to have survived this long from the goodwill and generous contributions from the public, we are indeed grateful to the strong support of all our stakeholders, whether coming from individuals, corporate bodies, government agencies, or the society in general.

(Farul Rafiq received a bone marrow transplant at Hammersmith Hospital, London, UK in 1991. He later recovered but unfortunately passed away in August 2011 due to fibrosis of the lung).

This run is important as it marks the milestone of this achievement. It definitely gives us a new perspective on what we should be focusing on for the years to come. It also helps to energise our spirit to go even further with what we have been able to bring to the public to help them cope with cancer, as well as overcome the disease in some instances.

The first batch of runners was flagged off at 8.00pm by MAKNA President, Dato’ Mohd Farid Ariffin accompanied by Mr Jacob Mathews, a long-time volunteer with MAKNA, a cancer survivor and also the recipient of “Tokoh Guru Negara 2013” and “Tokoh Sukan Selangor 2013”.

The winners of all categories of MFNR 2014 were as follows (Official time in bracket) :