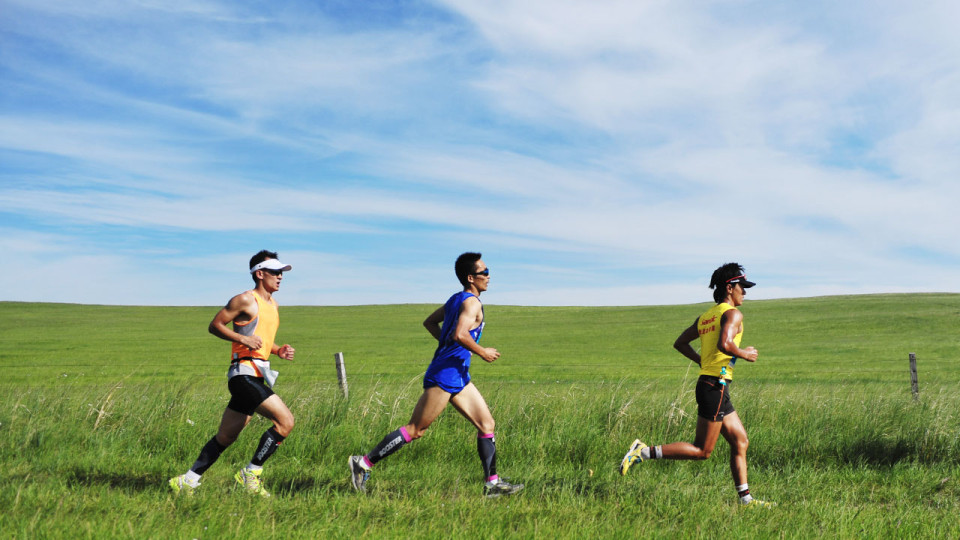 With its race route taking place across the lush grass plains around the Inner Mongolian town of Xiwuqi, the Genghis Khan Grassland Marathon 2014 was an exceptionally unique marathon in China.

The Grassland Marathon was part of the annual Genghis Khan Festival, which also consisted of a separate mountain biking competition.

This year’s 7th edition of the trail running race took place on 5 July, and saw a record 920 runners at the starting line, divided into 3 distances. It was an extraordinary running experience for everyone.

The hot conditions for the Grassland Marathon this year did not stop Sweden’s current national 100k ultra running champion Linus Holsmater from winning his 2nd consecutive race with a bit of flair, crossing the finishing line barefoot with a time of 2 hours, 43 minutes and 47 seconds.

Olya Korzh, an illustrious trail runner for Team Salomon from Russia, took first place for the women’s category, clocking in at 3 hours, 39 minutes and 24 seconds.

The start point for the Grassland Marathon 2014 took place at Xiwuqi, a small town about 140km from Xilinhaote, in the northern part of the Inner Mongolia Autonomous Region.

With over 90% of the course held in off-road terrain, the timed Grassland Marathon gave runners an exciting cross-country challenge predominantly run on sand trails and proper grassland. The start and finish points of this slightly hilly course were on tarmac road in the centre of Xiwuqi town.

Due to the off-road terrain, the Grassland Marathon might have been challenging, but it was not very technically difficult. Other than 1 short steep climb after 5.5km, the terrain was flat and somewhat undulating in the middle section.

3 Race Categories for Runners of all Types

With this year’s events concluded, look forward to the 8th edition of the Genghis Grassland Marathon next year, slated for 4 July 2015. Apart from the 42.5km distance, the 2015 event will also include 21.5km and 11km distances for runners of all fitness levels to enjoy the lush Mongolian grasslands!

Come run the steppes where the Great Khan of the Mongol Empire once rode! Dine on authentic Mongolian cuisine the day before the race from a menu written in the same traditional script that Temüjin himself probably used! While Xiwuqi is approximately 3 hours away from the airport in Xilinhaote, you will feel much farther away than that as you traverse the sand trails and lush grassland around this historic Mongolian community.

Whether you are a top international runner or an adventure runner, the unique experience of running in the Inner Mongolia Autonomous Region should not be missed.

Taking part in a foreign or local marathon needs preparation and training, so do check out the things you need to know when taking part in an overseas marathon.

The Genghis Khan Grassland Marathon, Half Marathon and 10km races will commence on Saturday, 4 July 2015. Registrations are now open, and will close on 30 June 2015.

7 Tips to Train for Your First Ultramarathon