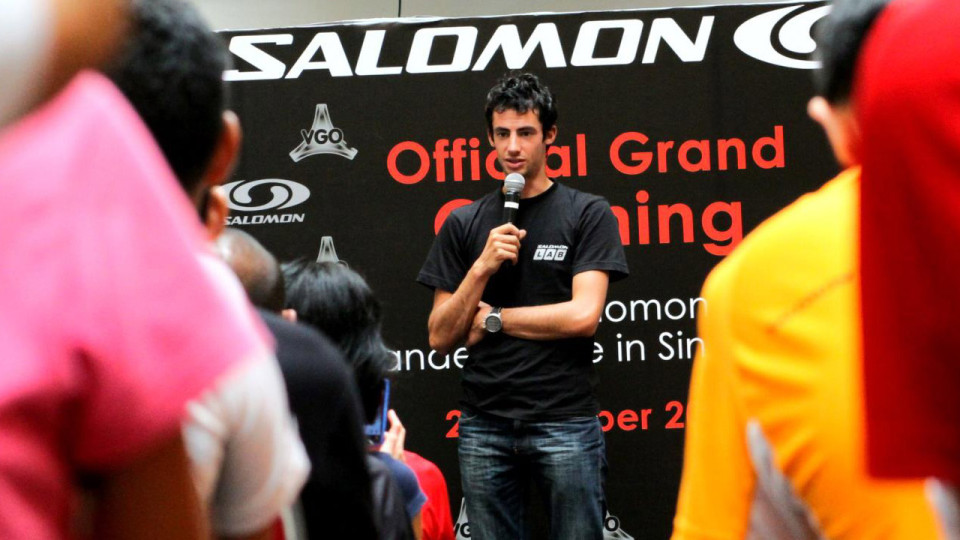 25 October 2011, Velocity@Novena Square was abuzz with excitement and growing anticipation, sparking a major step forward for the trail running scene in highly urbanised Singapore. Kilian Jornet, probably the most decorated trail runner whose many accolades include wins at the Ultra Trail du Mont Blanc and Western States 100, was present to grace the official opening of Singapore’s first Salomon Branded Store. If you do not yet know, Salomon is a French adventure sports label renowned around the world as the market leader in trail running.

RunSociety was honoured to be invited for the exclusive media session with Kilian Jornet around noon where he touched on two special projects of his, Five Races Five Continents and Killian’s Quest. With Five Races Five Continents, Kilian embarked on a visionary journey which saw him compete in the most important trail races in Australia (The North Face 100), North America (Western States 100), Europe (Ultra Trail du Mont Blanc), Africa (Table Mountain Challenge), and Asia (Mt Kinabalu International Climbathon). He won ‘em all. Yes, you didn’t hear us wrong! In the midst of that, he created history too by becoming the first non-American to win the Western States 100.

Kilian’s Quest, on the other hand, was a little more personal, dating back over three years. Kilian’s intention was to go around the world and seek out like-minded individuals who share his passion for the trails. And by the way, it’s still ongoing. You can follow his progress on www.salomonrunning.com.

Following the media session was the all important ribbon cutting ceremony, symbolic in any official inauguration. To us, it was a figurative ‘snap’ of optimism bestowed on trail running in Singapore that some way, somehow, with the limited number of natural trails around the island, the sport would take off on its own.

The workshop for the public began not long after with a thorough presentation by Gregory Vollet, Global Outdoor Sports & Community Marketing Manager, Salomon, who spoke about Salomon’s philosophy, its product range, and the extensive development process that goes into each of its masterpieces. For those who’ve admired the finishes of Salomon’s apparel and footwear range, they’d have definitely been marvelled by some of the insights garnered. We are not exaggerating. EVERY shoe model takes two and half years to come to fruition, going through over 140 prototypes before deciding on the final product. Another fact: Salomon registers some 50 patents annually!

Angelene Chong, Suunto Product Manager, also introduced an online portal utilising Suunto watch technology to track, record and publicise lap times: www.movescount.com. Well, Kilian’s using it too so you might want to check it out.

“It’s quite enlightening because prior to this, I didn’t know the range of shoes Salomon had and what they were all about. But the workshop let me know that there are certain ranges like road to trail and other products like apparels and racing vests. Those are pretty interesting.” gathers Boon King, 30, Researcher.

Kilian took to the stage later on where he did what he did best with the media earlier, except that this time, it was to an 80-strong crowd – not counting the dozens of bystanders. Given that the attendees were mostly avid runners themselves, they were full of queries.

Kilian’s friendly personality went a long way to connect with an otherwise passive crowd; very commendable indeed from a world champion. But there were a few who couldn’t get enough of him…

“I think the product information is there but we’d have hoped to hear more about his training programme. I know his time is limited but I think a lot of us here are runners so it’ll be good if we can hear how he trains, what he eats, his diet, his nutrition, and his recovery.” expresses Mervyn Lee, 39, Architect.

Others were just grateful to have the honour of meeting him in person.

“Beforehand, I was actually reading his (Kilian) story on the web and checking out his videos. It’s really inspiring. It’s a challenge for all the people in Singapore because we don’t have that much terrain like in Spain, in France, in other countries, so it’s an eye opener also.” says Marius U. Dumlao, 33, Sales Coordinator.

Challenge or not, there isn’t a doubt that trail running has its place even in Singapore. RunSociety thanks Kilian Jornet, Gregory Vollet and Angelene Chong for heading down to make this a memorable day for all of us. Cheers!

Just thought you should know that the guy writing this article was emceeing the event as well. *smiles*