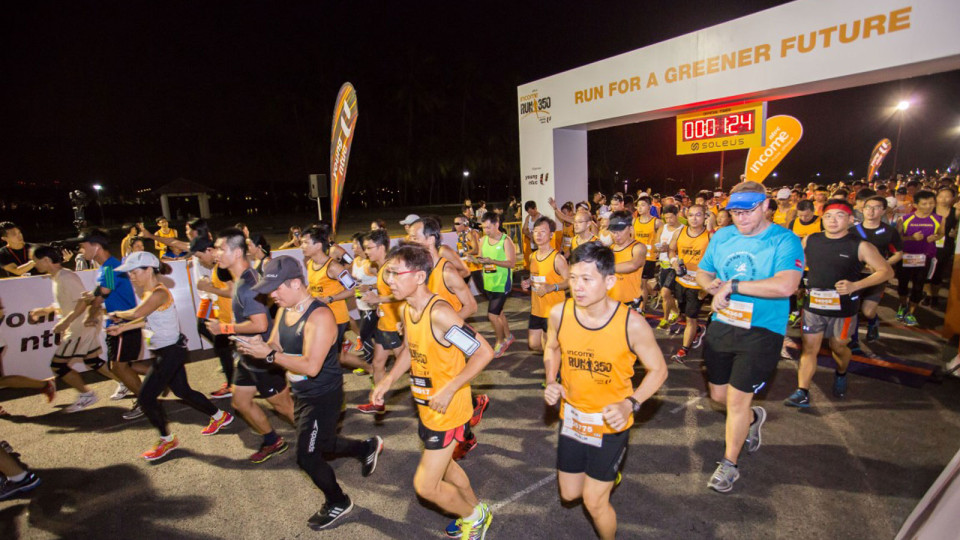 The issue of climate change has increasingly becomes a focus as the globe starts seeing its tangible effects. One run aims to take the awareness to another level by inspiring Singaporeans to take action now and inspire them to do their part for the environment on a more personal level.

Set for the first flag off at 05:00hrs for the 21.1km half marathon at the F1 Pit Building on Sunday, 10 April next year, NTUC Income RUN 350, Organised by Young NTUC, is introducing more green initiatives to educate and harness the strength of the masses to do ​their​ part to combat climate change.

The 2016 edition of the run will see a new category being introduced: Fun on Wheels. Participants of this category will cycle, in-line skate or kick-scoot through a 4km route, showcasing the ease and availability of environmentally friendly transport options. Other categories of the run include the 21.1km half marathon, 10km and the popular 800m Kids Dash. With the launch of digital registration, participants are not required to print their confirmation slips for race pack collection, reducing the amount of paper that will potentially be used and wasted. On race day, biodiesel instead of regular diesel will be used to fuel the generator powering the event, further reducing the carbon footprint of RUN 350.

Another exciting addition to the upcoming run is the Utility Challenge. To take part, registrants simply need to bring along a copy of their most recent utility bill when collecting their race pack. Those whose bill reflects usage that is under the national average for their household type will receive a cash voucher from NTUC FairPrice, limited to the first 1,000 participants.

These initiatives taking place in the lead-up to the run are in line with the global 350 movement. The movement aims to inform the public of the need to lower atmospheric carbon dioxide levels to 350 parts per million, which scientists believe is the level required for Earth’s sustainability.

Green initiatives are not new to Southeast Asia’s premier eco-run. Since it was first held in 2010 in Pulau Ubin, RUN 350 has introduced initiatives such as a Bring Your Own Bottle campaign to the run, to reduce the use of disposable and non-biodegradable plastic bottles, and the Medal Recycling Campaign, which encourages the public to recycle their old race medals. Singaporeans are also stepping up to show their support for the cause. While the first RUN 350 saw 1,000 runners coming forward to run for the 350 movement, more than 10 times as many – over 13,000 – are expected for the 2016 edition of the run.

Early bird registration for RUN 350 will be opening on 2 December 2015 (Wednesday), 10 a.m. Entries start from S$13 for NTUC/nEbO members and Income policyholders.

Yuyi is pursuing her studies in communications and communities. Now she relishes in the blend of both entities: communicating ideas to this magazine's community. As the lead news writer, her passion lies in helping people find interesting and timely news through the writing she provides.