6,000 Runners Earned Their Stripes At The Commando Challenge 2013 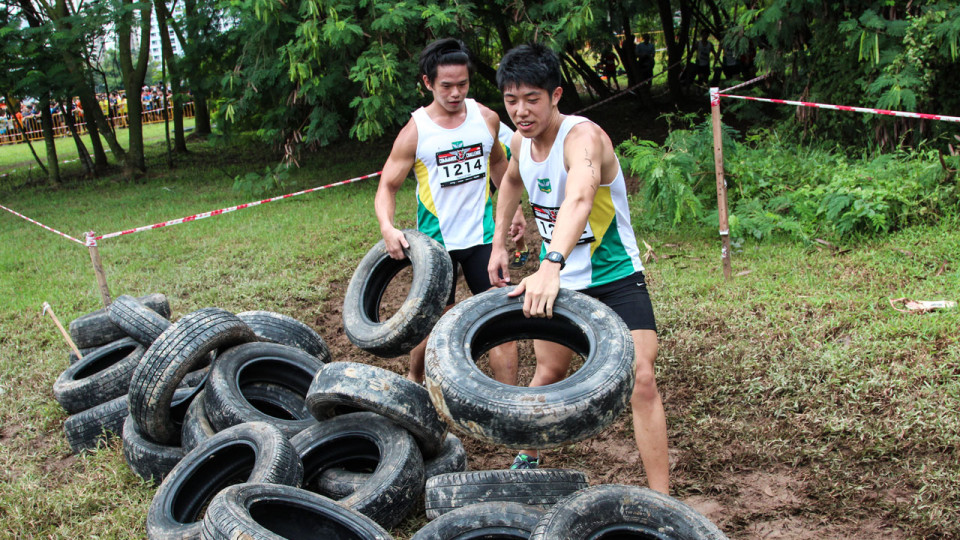 From scaling over walls, and crawling through mud, over 6,000 eager ‘Commandos’ turned up for the inaugural Commando Challenge at Tanglin Halt on Sunday. Race organisers kept information on the obstacles tightly under wraps, so just like everyone else, I didn’t know what to expect on race day. All I knew was that the event would be divided into 2 categories: the Elite category, which consists of a 12KM course littered with over 25 obstacles and the Sprint category, a 4KM course with 15 obstacles. I was part of the “Elite” contingent. We started off in waves of ten, and immediately tackled a battery of obstacles which included scaling walls and tire steps. There were also personnel who would advise and encourage runners along every obstacle, and I never felt afraid even as I clambered up a 5 meter high climbing net.

After that, it was off for a run along the Green Corridor, a straightforward trail path surrounded by greenery.

The route then led off to a patch of land that had been converted to a winding obstacle course. This was where lots of runners (including me) got bogged down. Due to the heavy rainfall experienced recently, entire stretches of the track became very difficult to run in due to mud.

Getting All Muddied Up

To be fair, I expected myself to get down and dirty. But runners were basically wading through the mud, rather than running through it. My shoes got sucked down into the mud more than once. I would say the obstacles weren’t a problem here, as they were evenly spread out every 200-300 metres, but actually getting to them was the real challenge. Big kudos to those runners who really scraped and pushed through the mud here!

But the Commando Challenge wasn’t all about braving the mud and scaling obstacles. It was also about camaraderie as well. With the entire event being so physically demanding, my feet cramped up once during the final stretch.

I hobbled off to the side, and did what I could to relieve the cramping. In the 5 minutes I was sitting down, I was pretty touched that 3 different people approached me and offered their help.

With my leg cramp subsided, I ran down the final stretch at Tanjong Pager Railway Station, where I dipped into the very last station which was essentially a gigantic ice-water pool. It was crazy cold, but I won’t deny it: the after effects were very refreshing! I was amongst the earlier waves, waiting for 30 minutes before setting off. As the crowd got bigger, people were kept waiting for longer than expected.

There were hydration points spread out evenly across the entire course providing isotonic sports water, but all of them (including the finishing line) lacked plain drinking water, which was a pretty odd choice.

Being all covered in mud, I would also preferred if the organisers provided a “wash-off” point with water to clean up.

A Genuine Sense Of Achievement

All-in-all, I really enjoyed the obstacles, which challenged myself in a way different from other running events. I really felt a sense of accomplishment when I crossed the finishing line. Due to it being a first-time event, I do hope that the logistics could be ironed out next year for a bigger and better Commando Challenge.

How did you find the Commando Challenge? Share with us your thoughts below!