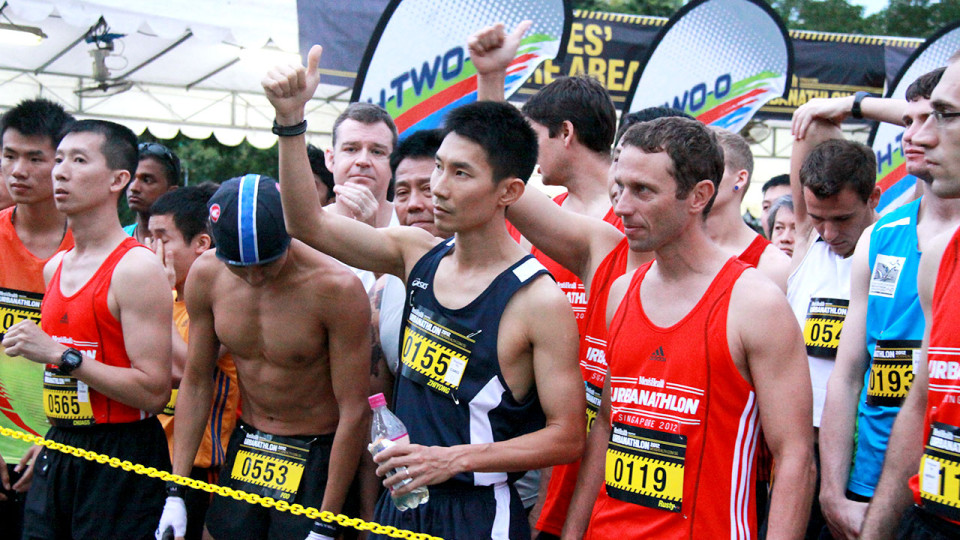 It is my third Men’s Health Urbanathlon but this is one of those races that gets me excited every time.

Many of us have no problems running 14 kilometres. It is, however, a different story when you add nine challenging obstacles. The obstacles will break your running rhythm and force you to use different muscle groups.

Only the craziest men will wake up before the sunrise, form up at the START line, and wait for the flag-off. At 7am, the sky grew brighter and the “urbanathletes” grew excited. Everybody was raring to go.

I fully agree with the emcee that this is the “manliest and friendliest” race. The men shook hands and wished each other all the best before we started.

Soon, the race began. The men were flagged off in waves, each 1min 30 sec apart. The Men’s Health Urbanathlon is a race for the “bands of brothers.” Throughout the run, I met many pairs or groups of runners. Everybody was supporting and cheering each other on. The men from the Singapore Police Force, in particular, caught my attention.

“The race was good, the marshals guided the route well and the obstacles were challenging. Our training also includes obstacles so it helped us.” says Wilson and Sidek, members of the Singapore Police Force who signed up together.

The slopes were tough, the stairs were intimidating, but the runners were friendly. I thoroughly enjoyed myself once again, meeting runners from all over the world, united in the cause to showcase “manly-ness”.

There was a group from Chatsworth International School that comprised runners from Australia, England and New Zealand. While they agreed that all the obstacles were challenging, one of them mentioned that he really hated the stairs and enjoyed the change from Fort Canning Park to this year’s Marina Bay Floating Platform. They definitely will be back next year.

Last year, they replaced the mud pit with a simple crawl. This year, the organisers reinstated the infamous mud pit, allowing the manliest men to get down and dirty. It was my favourite obstacle. Well, besides the mud spa, how often do we get covered in mud?

Of course, not many people agreed with me. Some found it disgusting and the mud pit only had two lanes and built up a queue toward the end of the race. To be fair, I believe the set-up must have been quite a challenge for the organisers. The large scale obstacles are not easy to manage and I commend them for a job well done.

The carnival at the end of the race was also great. Free food, free beer, games and freebies were good ways to round up the morning.

There were many interesting characters at the race too. The disabled athletes, Singapore Blade Runner and 1-Arm-Runner, proved that obstacles were not enough to stop them from achieving excellence in life.

I end off with words of wisdom from Steven, “My hair helps my friends find me among the crowd!”

I am a writer by day, an athlete by night. I love running at night because the streets just become so quiet and peaceful. My active lifestyle includes running, swimming and a passion for soccer. I have completed a few marathons and I enjoy other races like biathlons and urbanthlons. The only reason why I don't do triathlons is bikes are too expensive!