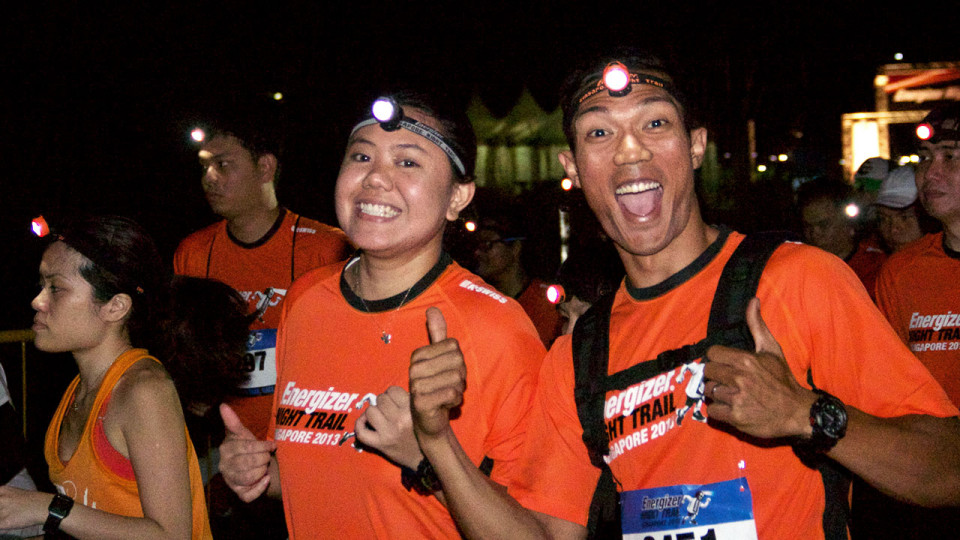 The Energizer Singapore Night Trail was back charging Lorong Asrama into a frenzy. “The third time’s the charm” proved true when there were 2,000 more runners than in 2012! A stream of reflective bright orange flooded the lanes of Asrama for Singapore’s most novel night race. A rare treat, since this area is only available to military men! The race opened up to children in a big way! New 1.5km and 3km obstacle courses were introduced. A great way to spend the Saturday, families jumped and crawled through a fun and friendly obstacle course. It was so well made that it allowed anyone of any fitness level to finish with enough breath to laugh loudly at his or her fresh victory!

It was amazing how much energizing action organisers could pack into the event grounds. Just the carnival alone had photo booths, a MILO van, reverse bungee, a rodeo ride, the micro charger game, a treasure hunt, combat creatures, FREE ICE CREAM and amazing booths by the generous sponsors. It was so well organised and well thought out that kids were beaming smiles in the deep dark forest. Runners could be identified by those novel headlights they wore – just brilliant! The race portion was well executed. There were clear markers of the route and medics were placed strategically. Safety was of utmost concern, so volunteers were sited at checkpoints and dangerous natural obstacles to guard against accidents. One volunteer even steered runners away from a dangerous “bush”! As it was so dark, the light from the headgear was instrumental to keeping everyone on the straight and narrow. The cross-terrain run had a lot of hilly portions. After the first kilometre, the pack started to thin with the slower runners taking the rear. The uphill portions were major checkpoints. Fortunately, grace was apparent even in the darkness, with walkers keeping tightly to the left while the faster racers sped past on the right.

Brian Liu, a 26 year old, 6km runner said that the race was fun and brought back memories of when he was in the force. He also lamented on how it was so different coming back without boots and running through the tracks, when stealth ruled the army way.

The geospatial consultant said, “The antiseptic wipes were a great idea as people would get small cuts and bruises from the jungle and the rocks, so it was fantastic to clean such cuts! Perhaps they could give Zappy Boy antiseptic wipes out before the race started, so it would be a personal triage, before the wounded met a medic?”

The Energizer Singapore Night Trail 2013 had something for everyone. Each race registration would have Energizer and Pink Apple, the race organisers donating $2 together to the Singapore Disability Sports Council – positive energy all around! 2013 had almost 6,000 runners committing to positivity. 2012 had about 4,000. Let’s look forward to 2014’s impressive number!