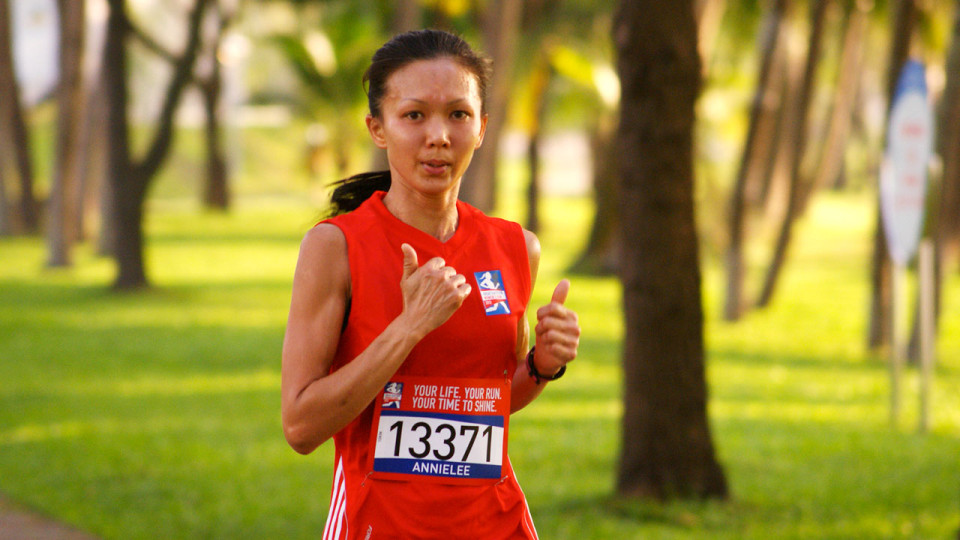 Close to 15,000 enthusiastic female runners gathered excitedly with their besties at The Float@Marina Bay on 11 November 2012. Honest to goodness female camaraderie filled the atmosphere, as fellow runners greeted each other with an encouraging smile and words of encouragement as they awaited the start of Asia’s largest women’s only race. It is good to know that The Great Eastern Women’s Run is a key initiative under Great Eastern’s Live Great Program which promotes health and wellness through sports. The key of this program is to help women, live healthier, better and longer.

The route was well thought out; runners began their race at The Float@Marina Bay. The initial part of the running path was wide as runners ran past the Singapore Flyer and F1 track. The wide running space subsequently branched out into Nicoll Highway, of which a slight slope was experienced. Runners ran passionately past the backdrop of an urban setting of office buildings and the upcoming sports hub.

There came an unexpected ‘twist’ to the route, as the race route took an unexpected turn into the Kallang Riverside Park. It was a short run through a part of the park before the runners exited the park and headed towards Beach road. The running path was narrower as compared to the open space in the initial part of the race. However, this did not pose much of a problem as by now most of the runners had paced themselves out in accordance with their own personal running speed. Our female runners continued to give their all in clocking their personal best, as they ran past the tranquil Kallang River, blissfully soaking in the scenic view as their feet pounded tirelessly on the pavement in unison with the tranquil chirping of birds nearby. Female runners were also considerate and pleasant and fast runners were disciplined to overtake only on the right hand side.

Running alongside the Kallang River leads one past the Singapore Flyer and Gardens by the Bay. Runners would need to run up a small slope before they reached the finishing line at The Float@Marina Bay. The crowds at the finishing line were amazing! Many offered shouts of encouragement, congratulating runners on their completion. Many family members and friends were also cheering their loved ones on at the finishing point. It was a heartwarming sight indeed! Overall, the roads were well-barricaded and there were sufficient marshals and traffic police who were on duty to safe-guard the well-being of the runners. The run was a smooth one, with adequate number of water points which were evenly spaced out. Runners were blessed with clear skies with various sights of the city, traditional shop houses and riverside tranquility. However, what was lacking was the number of cheerleaders and pacers that boost the spirits of participants.

“This year’s route was good. Although there was a huge crowd, there was space for running. The cheer-leading before the 5km flag off was a nice surprise. The turnout was huge but orderly and there were clear instructions on how to get to the start point. Overall, the feeling was good although I think there could have been more encouragement and support for runners along the route.” – Serene, 28 year old.

A number of activities were lined up to pamper the ladies at the Carnival held at The Float@Marina Bay. There was even a powder room for women to touch up after a great run! There were also booths giving out complimentary hotdogs, muffins, fruit and ice cream. What a great way of rewarding after a satisfying run!

The less fortunate were not forgotten. Breast Cancer Foundation, Singapore Heart Foundation, Singapore Cancer Society (Cancer Prevention Fund) and Singapore Council of Women’s Organizations booths were at the race site to raise awareness and funds for health issues closely associated with women. To date, more than $35,000 has been raised. Another highlight included Great Eastern’s Live Great Family Zone. In addition, runners enjoyed an invigorating post-run work out by True Fitness as they danced to Sh’Bam, the latest dance and fitness craze to hit town.

It was a day our nation’s ladies showed great determination to achieve their personal best. With great camaraderie, you ladies made the nation proud!

A true blue 'Eastie' at heart, An Lian has a love for the great outdoors. An avid runner by night, she enjoys the feel of wind against her cheeks when she cycles and the refreshing feel of the clear, blue water when she swims. A down-to earth individual who loves traveling, reading and exploring and trying out new things, An Lian aims to live life to the fullest.