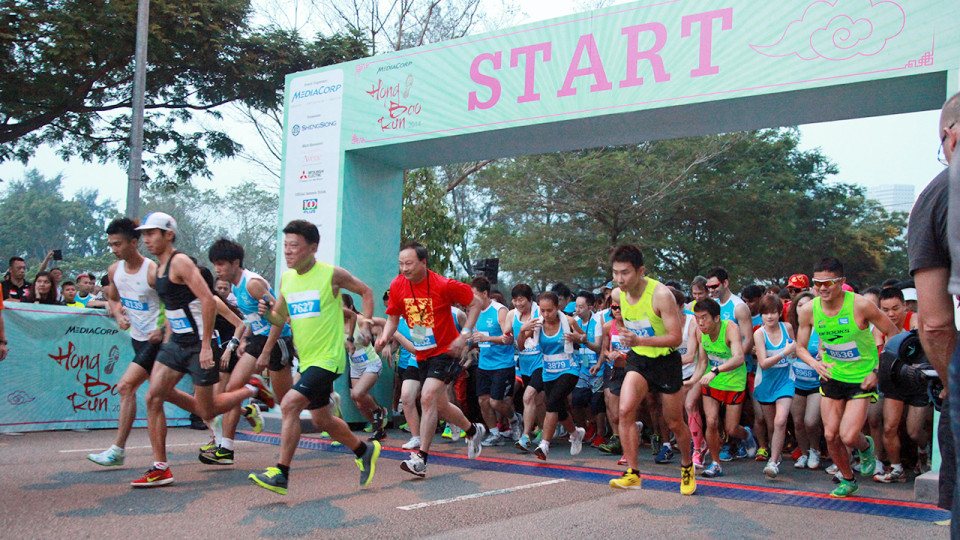 Fresh from winning Singapore’s first marathon gold medal at the recent SEA Games in Myanmar, Mok Ying Ren showed that he was equally adept at shorter distances as well by running away with the men’s title at the inaugural MediaCorp Hong Bao Run 2014, held at the Nicoll Highway on 9 February.

The female winner was another prominent local runner, Suzanne Walsham, 40, who also recently won the Empire State Building Run-up for the 5th time. With their victories, they each walked away with the top prize purse of $2,888 in cash.

The MediaCorp Hong Bao Run 2014 is the first running event to be organised after the recent Chinese New Year festivities and the mega lucky draw was the event’s key attraction, in line with the CNY theme.

Running With The Stars

Despite the fact that the event was held just a week after the CNY celebrations, the event still attracted a crowd of some 5,000 participants, along with a star-studded line up of local celebrities, including the stars of the upcoming telemovie “Hong Bao and Kisses” – Felicia Chin, and Joshua Tan, as well as other household names like Ben Yeo, Jayley Woo, Xu Bin, Ian Fang and a host of popular radio jocks like Mike Kasem, Wallace Ang, Dicong, Chen Ning, D’zar, Jaynesh, Bobby Tonelli and Jiafa.

Earlier in the morning, radio deejays Lim Peifen (Y.E.S. 93.3FM) and Glenn Ong (Class 95FM) pumped up the crowd while local crooners Jack and Rai kept the crowd entertained. Many of the runners also turned up in Chinese New Year-theme fancy dress outfits, with more than a few “Gods of Fortune” at the start line, much to the delight of their fellow runners.

But the highlight of the day without a doubt was the mega lucky draw held after the run. The chance to win $88,888 in cash proved to be a strong motivation for the bulk of the participants to stay on after the race, which is unusual, as runners tend to disperse quickly after such running events.

When the name of the lucky draw winner was announced, he could hardly contain his joy and celebrated with repeated fist pumps before going on stage to collect his prize from guest-of-honour Mr Teo Ser Luck, Minister of State for Trade and Industry, who also flagged off the race and ran the full 8km.

“I am very surprised and honoured, I feel very blessed by the God of Fortune! I don’t know what I’m going to spend the money on but I think I’ll probably give a portion to charity!”

Meanwhile, 26-year-old Mok and Walsham snagged the top prize for the male and female categories with times of 26 minutes 41 seconds, and 28 minutes 34 seconds respectively to set the benchmark for future runs. Said the SEA Games gold medalist, who recently enlisted into national service,

“I’m very happy to come in first. It’s been a tough 2 months for me after the SEA Games. It’s been challenging as I just finished 3 days outfield training last Friday so I’ve only been running once a week! I’m really glad I did well at this run. It’s a great way to celebrate the Chinese New Year.”

Red Packets for the New Year

Besides the grand lucky draw prize of $88,888, there were also 10 other lucky draw prizes of $888. Three participants who gamely dressed up in the spirit of Chinese New Year to take part in the fancy dress contest also walked off with hong baos of $888 each.

With a mega lucky draw and plenty of festive fun and prizes, the Mediacorp Hong Bao Run 2014 was indeed a great way to usher in the Lunar New Year.

Did you spot any celebrities? Or were you one of the costumed runners? Share and discuss your experiences in the Mediacorp Hong Bao Run on our forums!