Nike She Runs Singapore 2013: Running Unleashed in the City 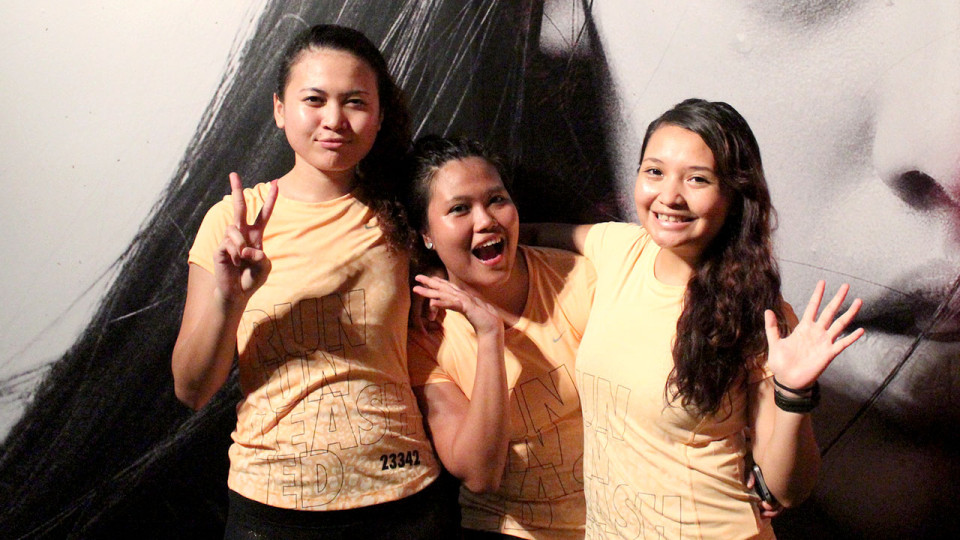 The third female only Nike race took place without a glitch on 11th May 2013. From various parts of the island, 8000 women of all ages and races made their way down to the Gardens by the Bay East for the Nike She Runs 5K. Entry slots had been snapped up like hot cakes and registration closed mere weeks after it was launched. The Gardens by the Bay East was filled with a sea of women clad in the official bright orange Run Unleashed race tees all eagerly raring to go. The weather was kind and did not disappoint despite an earlier looming threat of gloomy clouds in the afternoon that subsequently cleared. Momentum towards the race had been growing over the past weeks as participants had been going for race clinics and using the hash tag #runfree on instagram to showcase their personal training and preparations in the lead up to this event. Amidst the breezy air, the race grounds had been turned into a carnival-like village with areas for massages, manicures, picture taking booths and more were set up for the after race programmes. The run was staggered in three waves to create a manageable flow and the winner, Anne Qihui who won the race in 17 minutes and 51 seconds had already hit home even before the last wave was flagged off. While waiting for their turn to run, camaraderie was in the air as women could be seen forging new friendships or bonding with old friends while taking memorable snapshots to keep. The scenic landscape of the Singapore Flyer, Marina Bay Sands and the Gardens by the Bay made it the perfect background and many of the photos were instantly shared on the various social platforms.

The well planned route took the runners past the waterfront promenade, across the bridge to the Marina Barrage and Flower Dome where many bystanders out on a leisurely strolled stopped to give cheers and encouragement to the ladies. Making a U turn at the 2.5km mark, runners took the same route back where the race to the finish was on! There was no stopping these determined ladies who were indeed running unleashed. Lots of cheers could be heard nearing the finish line where cameras held by both professionals and supporters were ready on hand to take that proud finishing moment.

Faithful boyfriends, husbands and supportive friends and families could also be seen at the finish line cheering not only their loved ones but everyone on. As the runners collected their finisher tee which read “I Ran Unleashed”, they headed to the Village grounds where live entertainment was provided by popular local bands belting out tunes that raised the already lively atmosphere to a higher vibe. Free hot dogs and ice cream were thoughtfully provided by the organisers to quell any hunger pangs. Runners who needed to change could do so in the huge changing tent while massages and manicures were offered to pamper the ladies as well. A popular booth that had long snaking lines was the one where they could take photos while holding up giant “polaroids”. As the night drew to a close, the satisfied and happy faces of the runners said it all. The run was a hit and they made it through.

About Nike She Runs 5K

This run is part of a series of 5km runs involving more than 85,000 women in 12 cities united in their journey to embrace running and improve their fitness levels. Not only does it aim to promote a positive sports experience, the Nike’s global She Runs series aims to build up a women’s world wide network that transcends geographical boundaries to inspire and motivate each other through the use of online social communities and Nike+.

Running as far as her legs will allow her, Sheryl loves the freedom of exploring new places that it brings. She loves to participate in local and overseas races and is also an avid diver and yogi.