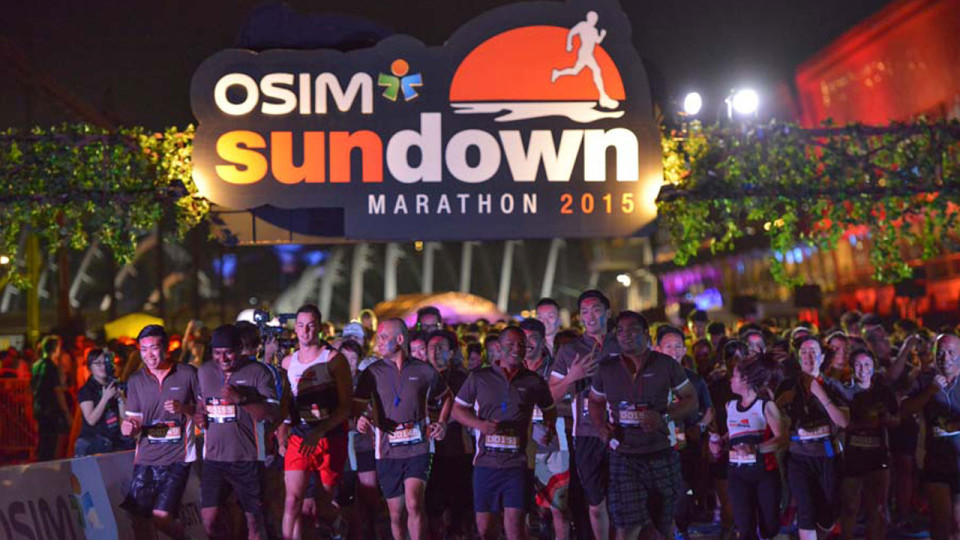 Being part of Asia’s largest night marathon, OSIM Sundown Marathon never fails to awe runners. In total, up to 26,000 runners took part in this night race. Among the runners were familiar faces like Rachel See, Colin Tung and Ravin Kumar, all whom participated at the recent SEA Games.

The overall experience of this year’s OSIM Sundown Marathon 2015 was an enjoyable one. Personally I have been through Sundown half marathon for the past 3 years and it has been a great time bonding with my friends. With so many marathons events in Singapore surfacing, I felt that having a theme to this year’s OSIM Sundown marathon gives uniqueness and a sense of belonging to all the participants as well as myself.

The race route took us through scenic landmarks like the Singapore Flyer, Marina Bay Sands, East Coast Park, Singapore Sports Hub, Gardens by the Bay and The Float@Marina Bay.

Pulse of the Tribe

This year’s tribal theme made Sundown Marathon more hyped and interesting with tribal decoration and photo booth during the race pack collection venue at Suntec City on race day itself. Drum beats and the flames gives us the sense of hype and to be mentally ready during the start of our run. This year’s edition was organised and well-planned, with well-lit routes and strategic water points to ensure runners are safe and adequately hydrated. The weather was breezy and cooling, therefore making the run more enjoyable.

Overall, I felt that the event planners made a conscious effort to ensure that the race goers are adequately taken care of. This can be seen through their meticulous care in logistical planning of their crowd management, route safety and medical attendants. In addition, the race event booth was interesting as there were movie screening to massage booth as to ensure runners are entertained from noon to dawn.

We chose the 21 km half marathon this time round because most marathons we are running for are 10 km. Most of my friends have not participated in any distance-running further than 12 km, therefore we decided to push to our limits and set forth to Sundown’s half marathon! All of us had to step out of our comfort zone as we are challenged through the night without a night’s sleep. It is also one of our bucket list items to physically and mentally challenge ourselves time and time again. From this year’s event, we learnt that every run distance is possible with proper training and preparation.

Preparing for a Half-Marathon

Training for a half-marathon took me a few months of practice and these are some training pointers I would like to share:

We felt that the delay in the flag off timing was such a disappointment. My friends and I were flagged off 45 minutes later than the stipulated flag-off time. I understand there is a huge crowd to manage, and runners will go by batches. However, the wait can be spiced up with more music and interaction from the emcee. I would suggest the organisers to include doing some warm-up exercises or to gear us up for the run instead of waiting in such close proximity with all the other runners without any much interaction from the emcee and impatiently waiting for the flag off. The crowd control security wasn’t friendly to aid as well. Also, I felt the motivators seemed to lack enthusiasm in their cheers and were talking. In addition, I would also suggest having pacers for the different batches during the flag off, so that the different batch of runners can get their own motivation from these pacers.

How was your race experience for the Sundown Marathon Singapore this year? Share your feedback and opinions with us!

Mabel is a health junkie, fitness bunny and oatmeal lover!