Reebok ONE Challenge 2014: Catch Me if You Can! 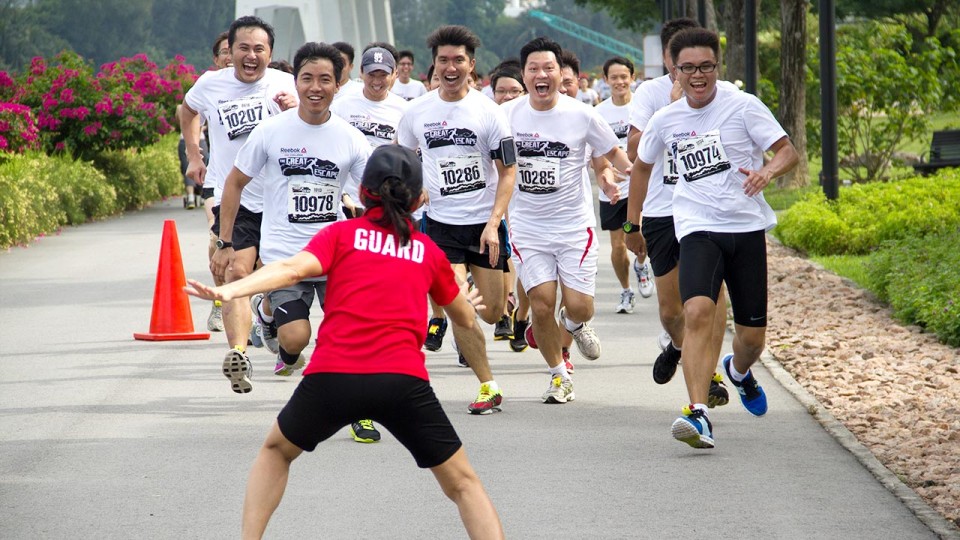 Last Sunday morning saw participants running in the inaugural Reebok ONE Challenge in Singapore. Over 3,200 took part in the 5km race, modelled after the traditional game of “Police and Thief”.

Runners took the role of “Prisoners”, evading the “Prison Guards” who were trying to hunt them down!

The race, with participants ranging from 13 years old to over 60 years old, was flagged off at 9am by Mr Henry Quek, Senior Manager of Distribution SEA, Reebok.

“Reebok has successfully reinvented itself as one of the world’s top fitness lifestyle brands. With this unassuming achievement, we want to celebrate and share it with anyone who loves fitness and aspires to live a happier, more fulfilling life through a landmark event that epitomises fitness; with the incorporation of obstacles and fitness challenges derived from Reebok’s key fitness pillars such as Yoga, Crossfit, and Les Mills. To inject an element of fun, we’ve also introduced a ‘Prison-Break’ theme where participants will have guards chasing them down for their life tags while plotting their escape. This is what the Reebok ONE Challenge offers – the pinnacle of all fitness races.”

Amid the many mass running events taking place in Singapore, the Reebok ONE Challenge took the concept of runs to the next level.

“There is no Winners Podium in the Reebok One Challenge, no single winner. Every individual who has completed the challenge has achieved the goal that they have set for themselves, and therein lies the win for the individual,”

Participants began the challenge without any “Life Tags”, which they earned as they successfully completed each of the 5 fitness challenges on the 5km route, including holding a yoga pose successfully, or performing 20 squats within a stipulated time period.

Runners’ stealth and speed had to come into play as “Prison Guards” were hunting them down to steal their life tags! They also had to negotiate obstacles on their escape route.

Participants who completed the exhilarating challenge took home a finisher T-shirt and medal.

“My friend asked me to take part in the Reebok ONE Challenge with him, and I thought it is an interesting concept. I like the added challenge of the obstacles and fitness stations, and having the guards try to remove you from the course, instead of just running a 5km race. I look forward to future editions of the Reebok ONE Challenge!”

Runners quenched their thirst at the hydration stations with Aquarius Isotonic, a beverage with a unique combination of electrolytes (Sodium and Potassium), vitamin Bs (B3, B5, B6, B12), and also natural Guarana extracts.

With many different themed runs happening in Singapore, we’re happy to see that runners enjoyed the inaugural Reebok ONE Challenge!