Skechers Electric Run 2014: Grooving Along To The Finish Line 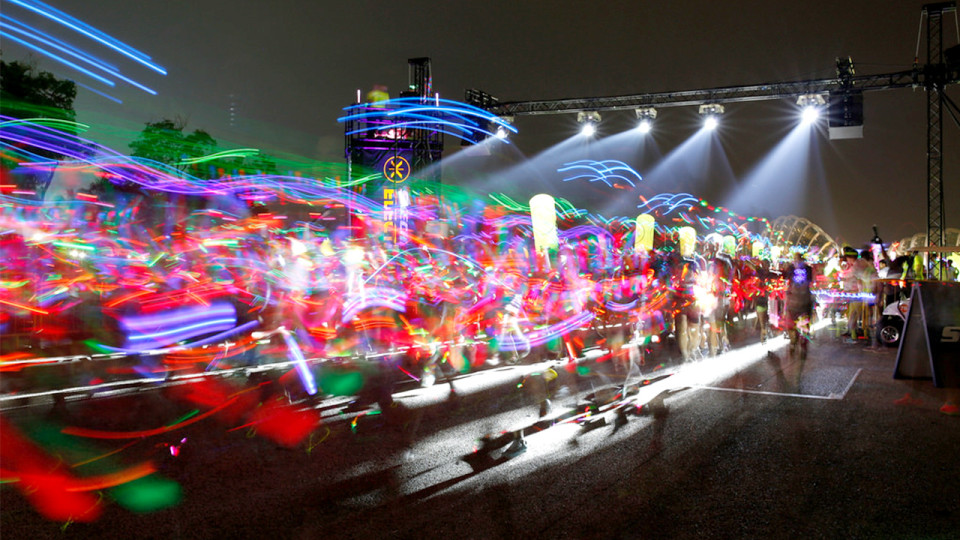 On a Friday night, while many people were heading towards restaurants and pubs to wind down after the long week, the electric runners were making their way towards the F1 pit area instead, all dressed in pom-poms, neon wigs, face paint, and even glow-in-the-dark gear. Most of the participants were under 30, but I even saw some awesome parents pushing their babies in strollers with glow sticks around the wheels, and young children were running around excitedly too.

Electrifying Spectacle Of Light And Sound

At the starting line, the emcee was periodically showering the eager runners with handfuls of free glow/LED items, building up much excitement. Catchy electronic dance music was blasted and participants couldn’t help but sing and groove along to the music. The participants were flagged off in waves starting from 8pm sharp.

I was very excited to check out the signature feature of the Skechers Electric Run, which were the different “fantasy lands” that were spread across the track. My favourite was “Neffmau5 Land”, where multi-coloured lanterns hung creatively between 2 long rows of coconut trees, with some great music by the DJ deadmau5. Coupled with some mist sprayers and an eye-catching light display, running through the stretch really gave me the sense of being transported to a different world with a mystical and theatrical light show.

My next favourite land was the “Rainbow Road”. Basically, I ran through many gigantic rainbow arches, each of which changed colours every now and then, in sync with the electronic dance music blasted from the sound systems.

There were some areas for improvements though. I felt that the “Electro Rainforest” fell a little flat. To be fair, the concept was great, because the umbrellas provided great surfaces to reflect the coloured lights. However, the tents from which the umbrellas hung from were drab and uninspired, stifling the whole concept. I believe if they re-did the same idea in open air just like what was shown on their official website, the effects would even be more stunning.

Nonetheless, the courselands provide a pretty interesting experience where you see how lights, music and colours are used creatively to produce some electrifying effects. Needless to say, it was a fantastic photo taking opportunity. I was just one of the many people busy capturing the dazzling visual spectacles with our phone cameras. I was also pleasantly surprised by a couple of photo booths set up by the organizer, with crews stationed to take photos for the race participants.

There were 2 hydration points, at the half way mark and the end of the race, with volunteers handing out 100 Plus isotonic drinks cheerfully. The running route was clearly marked out by road marshals. Then again, they weren’t really needed because it was almost impossible to miss the bright lights emitting from fellow race participants in front of you. Getting Lost In Fantastical Lands Is A Good Thing

For runners who can’t get enough of the race, the post-race party was the place to be, with many revellers grooving along to the electronic music and bigger laser lights dancing across the field.

Overall, the run was an eye opener. The beautiful skyline and the prominent icons of Singapore further enhanced the race experience. With a 4km track, those who looked for a fun-filled running experience that was none too strenuous definitely had their money’s worth. The Skecher’s Electric Run was definitely a memorable experience! Pei Lee likes nature, travelling and is a junkie for unique experiences. An atypical girl, she shuns shopping malls over the weekends and prefer to explore outdoor places and engage in interesting activities. Pei Lee also believes strongly in giving back to society and has a special place in her heart for physically disabled youth.