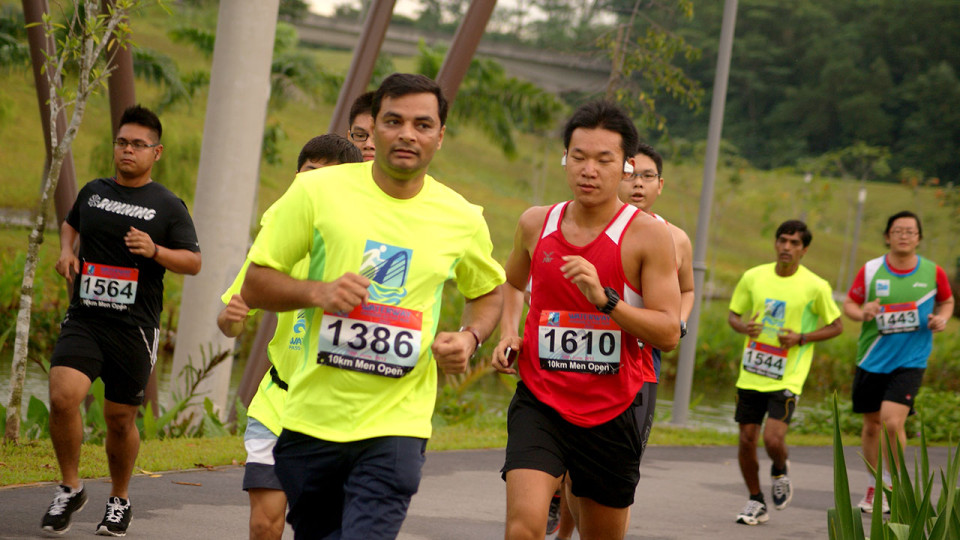 Tucked away in the tranquility of Punggol estate, the event, like its participants, was light and charming. Catchy pop music energized this breezy Sunday morning as runners prepared to compete in the 10km open category. Though this was no “Sundown” or “StanChart”, there was no lack of camera flashes, as friends and family snapped furiously and exalted encouragement at their running model. At 07:30am, the air horn blared and the runners sped down the 3-lane wide road surging through a well-marked route set against the waterway, sprawling construction and a beautiful sky of white and blue.

Community was a core element of Waterway Passion Active Run 2012. This inaugural event was put organised by Pasir Ris Punggol GRC & Punggol East SMC (Single Member Constituency), aided by passionate volunteers from “Punggol Runners” and other volunteers from various organisations. It was staged with clockwork precision and ample capacity. Abundant portable toilets and clear instructions afforded this race no queues and plenty of smiles!

In mere minutes, 33 minutes 20 seconds to be precise, Kien Mau Lim shot down Punggol Drive to the finishing line. The main party of 10km runners followed in spurts, each dashing strongly to the end. It was so cozy organizers were spurring the finishing trackmen on using their first names!

The sun hung high as 5km “fun” runners, clad in neon green started trickling in by bus, train and foot, with the interchange and MRT just seconds away from the event grounds. The music echoed louder off the surrounding blocks rousing the attendees into a bustle. Parents, with their children, formed up at the start line chatting merrily about the race and its many wonders. Children were spirited and well rested with the fun run only starting at 08:45am.

“Parrrrrrrrrrh!” the air horn blasted. Beaming grandparents, toddlers riding on parents’ shoulders, competitive brothers and proud parents legged it down the track appreciating the scenic waterway and the kind A.M. wind. Everyone, including the six mildly autistic kids and their escorts, was having a ball!

It has nice scenery. It was well organized in a heartland area. They deployed a lot of water point and medical point. I definitely enjoyed the run. I ran with some nice khakis. I will sign up for the next run.

Running in the 10km women’s open, she added

The water point should serve in cups instead of using bottles. If I’m a competitive runner, I only will take a sip and throw onto the floor. Even if I just run for fun, I also will not carry the bottle and run.

The organizers did a spectacular job and attracted great sponsors. The race was sharp and sweet unlike its long name. I wait with mounting anticipation for Waterway Passion *breathe* Active Run 2013!