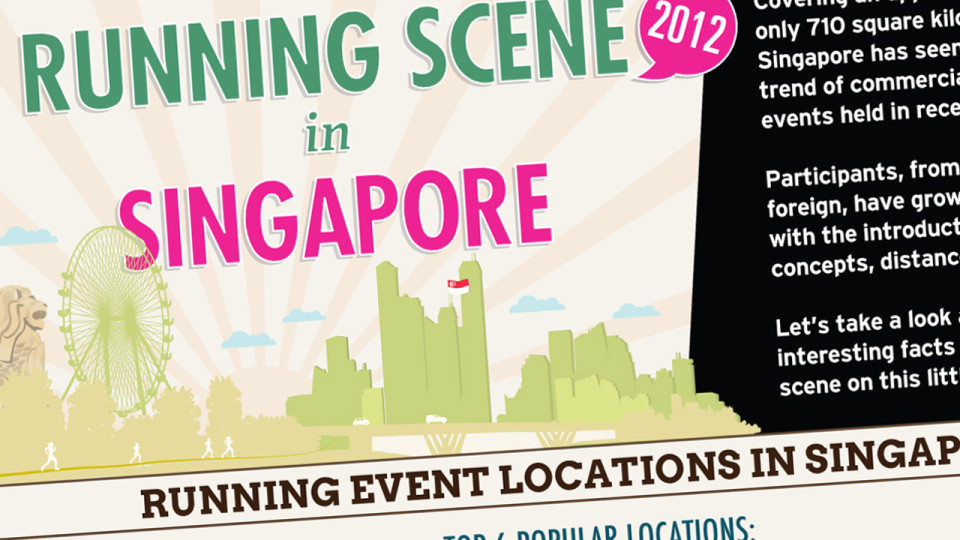 Singapore, a tiny red dot on the map often labeled for its limited land space area has seen many interesting runs in recent years. This concern has not restricted the capability of organisers to organise running events of various distances.

With our government’s intention of promoting healthy living and adopting a green effort, the running atmosphere in Singapore is set to grow tremendously.

Over the past year, Singapore has hosted about 56 major running events, around 28 different types of running distance varieties in different categories. Of course, this isn’t inclusive of the many other smaller or private running events that are happening almost every weekend around the island. The southern part of Singapore was the busiest in 2012 with almost two fifths of the running events taking place around that region. This isn’t surprising, as most of the prominent landmarks in Singapore are located within that area.

However out of the 27 locations, East Coast Park topped the chart with a whopping 17.2% for the highest amount of events hosted in 2012. The scenic coastline that stretches over 15km, packed with many car parks in the largest park of Singapore is set to be a popular running destination choice for years to come.

Every day is a good day to run!

So which month has the most running events in Singapore? November seems to be the busiest followed by July and April. These three months combined have clocked up over 1,703,438km running mileage out of 5,242,534km for the entire year. September has the highest running mileage in a single month with 900,596km clocked up.

August is the least favorite choice for event organisers mainly due to the fasting month, Singapore National Day and the Hungry Ghost Festival. Events sparks for February also seem to be affected by the Chinese New Year festival.

Other festivals did not hinder running events in other months of the year.

Races that start after 7p.m in the evening seemed quite rare in 2012 with most of the races flagging off in the morning. Sunday is the perfect day for joining a running event and we all have to agree it’s the best day of the week.

Every distance completed begins with a single step

The Twilight Ultra Challenge 2012 set the record for the longest running distance in 2012 at a distance of 100 miles while the NTUC Income RUN 350 kids dash enjoyed the shortest distance of just 350 meters. 5km and 10km distance categories look like a popular choice in the hearts of runners.

If you have taken part in any of the major running events in the year 2012 in Singapore, you would have contributed some mileage of going around our planet Earth!

If you run, you are a runner!

You do not need to have a license to be a runner, just a ticket to participate in any of the major running events. The year 2012 saw a huge amount of 403,126 runners consisting of both local and foreign counterparts.

You shouldn’t be surprised if you meet someone on the streets who has also taken part in any of the running events in 2012. Chances are that you will bump into at least 1 runner in every 13 people you meet.

Run to live, live to run!

An average male burned more calories than an average female. The estimated number of calories that runners burned in the year 2012 was more than 403 millions. That is equal to more than 1.9 million pieces of roti prata, 1.5 million bowls of ice kachang, 1.2 million plates of chicken rice and we can go on and on if you want.

If we could transfer those calories burned into energy. It could power every household in public housing for 38 days continuously. Think about how much electricity we would save from it!

Fun and health awarded with a price

It’s true that there is no such thing as a free lunch in this world. Organising a run needs money so does joining one.

If you wish to take part in any major running event, be prepared to sacrifice a meal at the restaurant as an average cost of a running ticket is slightly above the S$50 mark.

2012 has received over S$21 million in ticket sales with some of the proceeds donated to various charitable organisations. If you took part in a run in 2012, you could have run for a good cause too!

That SAFRA Singapore Bay Run & Army Half Marathon 2012 had the highest number of participants in 2012 with around 70,000 runners. However, it is only 1/3 of the huge amount of 209,000 participants in the Kahit Isang Araw Lang Unity Run held in the Philippines, which had the largest amount of participants in a running event in the world held to date.

There are many benefits of running which include weight loss, health improvement, prevention of loss of muscle and bone, fighting disease, confidence building, stress relief, training your mind, improved coordination and much more.

If you are a lady, there were a few women dedicated running events and Great Eastern Women’s Run was the largest women’s running events in Singapore with the highest women participation rate of about 15,000 in 2012. 2012 was filled with much joy, excitement, perspiration, disappointment and encouragement for all runners and organisers alike. We would like to express our thanks and gratitude to everyone for making 2012 a great successful year in the running industry.

As we reflect on what we all have done well in 2012, we prepare and brace ourselves for the next year. No matter what running events you join, the great feeling of crossing the finishing line will always be the same.

2013 will be another exciting year filled with fun and interesting running events.

Why not take a look at what there is in store for you in 2013 on our race calendar and take a step forward to join in any of the races this year.

If you have not seen the infographic that we have pieced together, take a look by clicking the image above.