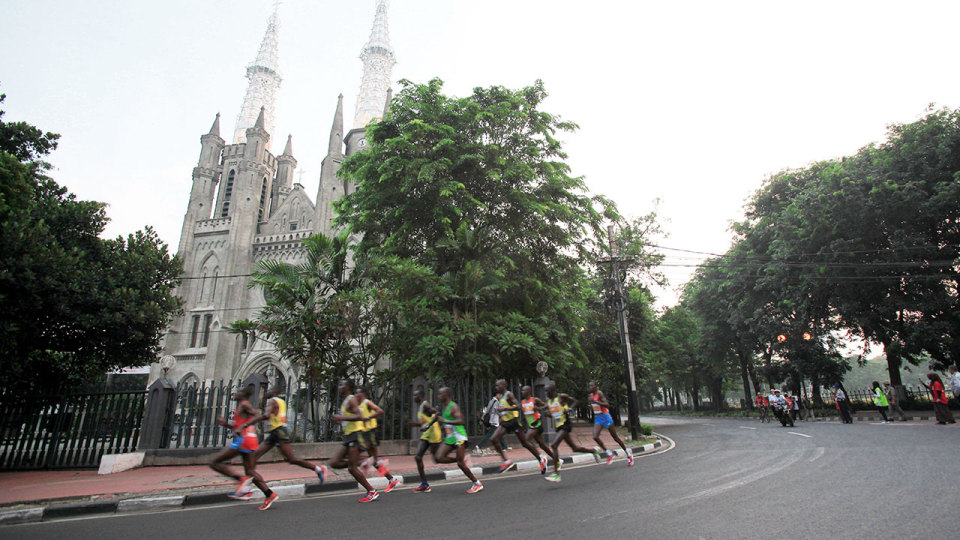 As ​the ​capital ​city ​of ​Indonesia, ​Jakarta ​is ​the ​melting ​pot ​for ​people ​from ​various ​cultural ​and ​ethnical ​backgrounds ​interconnecting ​with ​one ​another ​as ​they ​dwell ​in their ​daily ​lives. ​The ​myriad ​cultural ​and ​ethnical ​factors ​combined ​with ​sense ​of ​celebration ​and ​the ​spirit ​of ​sportsmanship ​are ​represented ​by ​the Mandiri Jakarta ​Marathon.

In ​October ​27, ​2013, ​the first ever Mandiri ​Jakarta ​Marathon was held, with 10,000 ​runners ​participating in this ​festive ​event. ​ Following the success of this inaugural event, the Mandiri Jakarta Marathon returns on ​October ​26, ​2014 ​and ​will ​be ​showing ​Jakarta’s ​uniqueness, ​beauty, ​diversity, ​and iconic modern ​landmarks.

A Plethora of Entertaining Activities for Runners! “At several spots in the 2014 course, runners and spectators will be pampered with 20 entertainment stages presenting lively Indonesian traditional arts and culture performances and also festive and splendid contemporary pop arts.”

In addition to that, the highlight would be at Monas, where a spectacular main entertainment stage will be set up for top Indonesian entertainment artistes!

The organizer targets 15,000 people from more than 50 countries this year. Based on last year’s implementation the total amount of resources are projected to include 1,700 volunteers, 5,000 security officers, 240 medical staff, and 340 cleaning staff. While logistics figure needed to support last year Jakarta Marathon include 45 units of ambulance cars, 5 tons of bananas and 55,600 bottles of mineral water and isotonic drinks! Race organisers also expect a strong international showing, and over 500 foreign runners from 30 countries, some of which are Japan, UK, French, Australia, Kenya, and Singapore have registered for this exciting event.

Join the Mariti Jakarta Marathon today, and see why Jakarta is a showcase for Indonesia’s cultural diversity!

How to complete the 6 World Marathon Majors