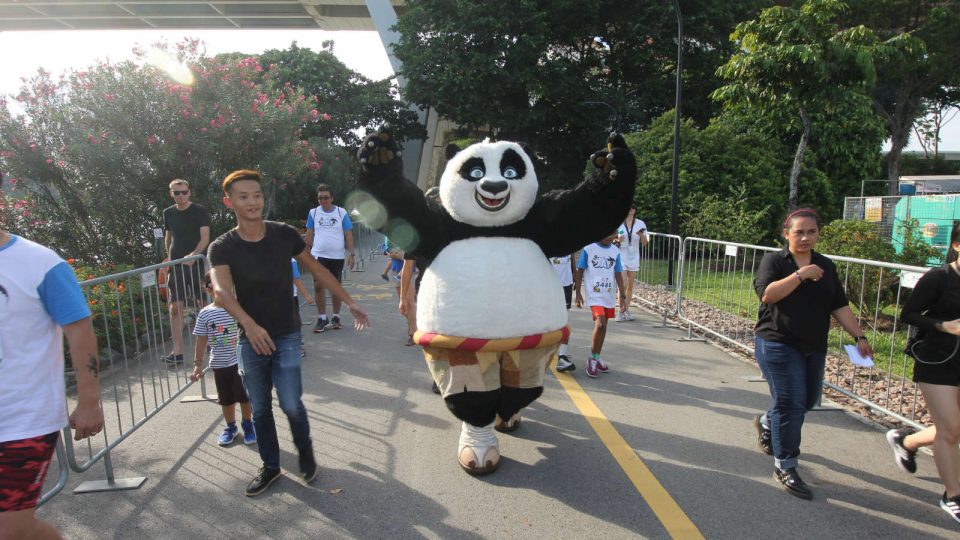 I signed up for 5km Fun Run, which was flagged off at 5:15 p.m. As a fan of DreamWorks animated movies, I was looking forward to this run.

The race pack collection was held at Novena Square on 17 and 18 June 2017. My friend who collected on my behalf said that the collection was smooth, there was barely a queue.

The goodie bag consisted of event tee, race bib, temporary tattoos, magazine, sponsors’ vouchers and newsletter, all packed in the DreamWorks tote bag. The tattoos and vouchers were slipped between the pages of the magazine.

Getting to the Event

To get to the event, my friends and I followed the recommendation in the Event Guide and took the MRT to Stadium. From Exit A, we walked leisurely to Gardens by the Bay (East) for about 20 to 25 minutes, passing by Singapore Indoor Stadium and Tanjung Rhu Suspension Footbridge.

There were many marshals along the way from Stadium MRT to the race village, thus we didn’t get lost.

The 5km Fun Run was flagged off at 5:15 p.m. I was late by 10 minutes and missed the flag-off. The crowd has thinned by the time I crossed the start line. It was easy to run.

We ran along Gardens by the Bay (East) accompanied by Singapore’s beautiful skyline and a bright blue sky. The view was picturesque. The route brought runners past a construction site before arriving at Marina Barrage bridge.

Many families with young children took part in the 5km Fun Run. Some older kids were encouraged by their parents to run. Meanwhile, younger kids took part in the run by walking, sitting in the strollers, or being carried by the parents. It was an afternoon of family bonding.

The hydration station was located at Marina Barrage. When I arrived at the hydration station, a long queue has been formed. Thanks to the hardworking volunteers, the queue moved quite fast. We were served with cold mineral water.

The route continued to Satay by the Bay, where the U-Turn point was located. Interestingly, the U-Turn point proved to be an important milestone as many participants were taking turns to snap a photo with the signboard. The run continued back to Marina Barrage.

Along the way back to the finish line, we were entertained by the NDP aerial flypast rehearsal, and awed the beautiful sunset. At the end of the race, we were given a finisher’s medal, cap and a small bottle of mineral water.

The Carnival was packed with fun activities. There was a movie screening area where Kungfu Panda movie was being aired.

The Rock Wall saw plenty of brave kids trying to scale the inflatable wall. How to Train Your Dragon: Obstacle Course was a hit amongst the kids too.

There were plenty of game stalls with long queues. It felt like a local pasar malam. Some of the games were Can Toss, Ring Toss, Coin Toss and Twister.

Participants need not be worried about feeling hungry or thirsty as there were plenty of food and beverage stalls that sold churros, ice creams, nachos, coffee, etc.

There were many photo opportunities, such as the meet & greet photo session with DreamWorks characters, instant print photo booth with props, as well as DreamWorks Day signboard.

During the run and the carnival, I didn’t meet Shrek or Fiona characters. There was a cardboard cutout of Shrek, but not the real-life mascot. I hope the organisers would consider welcoming more mascots for future events.