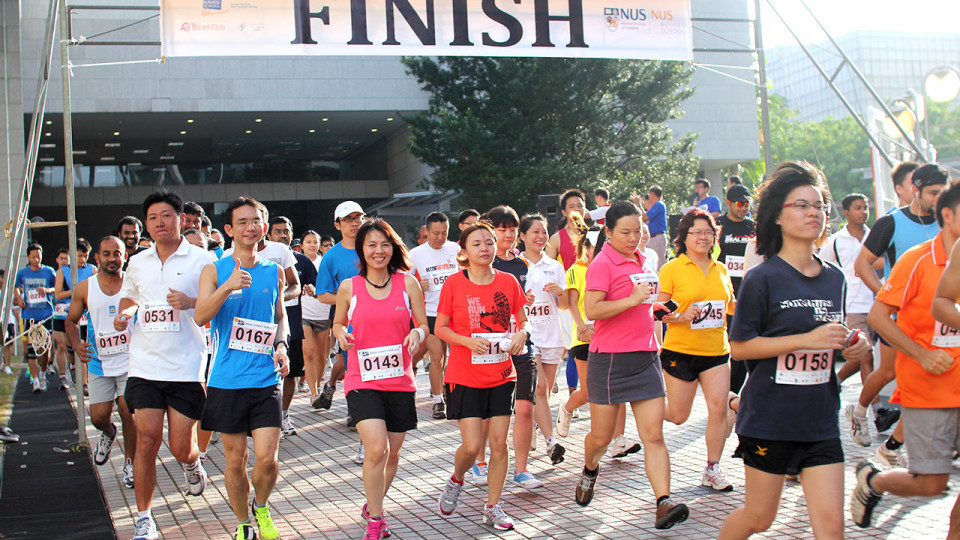 We’re only into the second week of 2012 and race season has officially flagged off. Moreover, giving back to society couldn’t be a better way to launch it.

Organised by the NUS Business School Alumni, the NUS Bizad Charity Run saw an estimated 500 runners – NUS students together with fellow alumni and members of the public – congregate to sweat it out for multiple local charities in support of the Community Chest. They include Assumption Pathway School, Students Care Service, The New Charis Mission and Willing Hearts. This year’s event is a build-up from 2011’s encouraging drive where S$30,000 was raised – of which 100 percent of proceeds were dispersed to adopted beneficiaries. 2012’s figure: an impressive S$40,000.

Thumbs up to the organisers who went out of their way to iron the rough edges (route wise) from the inaugural race last year. In short, a more seamless six-kilometre experience for participating runners.

“Well, in terms of the route, it’s much improved planning. Gone are the staircase and bottleneck. And the whole route although challenging, is enjoyable. This is the first race of the year. I think it’s very significant and also because it’s a charity run. I think all of us here, I don’t know if I can speak for them but I speak for myself – it was a good run.” says Tay Tze Siong, 44, Communication Manager.

For some, the scenic route was the highlight, extending from Kent Ridge Drive past University Town, all the way to Prince George’s Park before returning to the start point at NUS Business School.

“Of course this year’s scale is a bit smaller than last year because I also joined last year’s run. I feel this year is a bit less people but still quite fun because we can explore the University Town which I haven’t been to. Yes, it was fun.” shares Brenda Cao, 33, Assistant Manager.

All in all, it was an easygoing atmosphere as many of them runners began to kick their endurance engines into high gear after the Christmas hiatus. Symbolic of “higher” support – not just for the race but the local running scene as a whole – was the amiable presence of MG (NS) Chan Chun Sing, Acting Minister for Community Development, Youth and Sport & Minister of State, Ministry of Information, Communications and the Arts, who graced the occasion as Guest of Honour.

RunSociety looks ahead with eager anticipation as the 2012 Singapore Running Calendar unveils itself in the weeks and months to come.

Check out more photographs of the event on Facebook or at our Gallery.