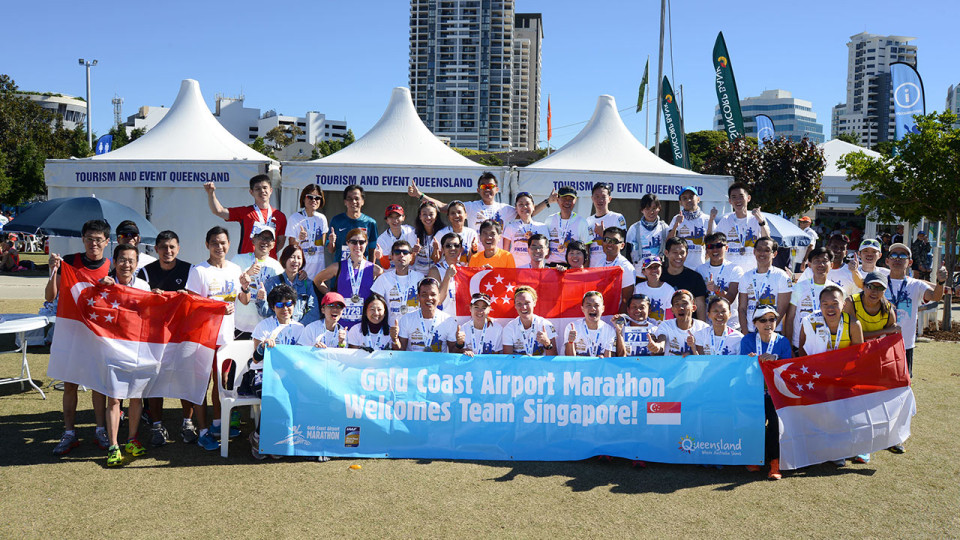 Hundreds of runners from Singapore clocked their personal best times during the Gold Coast Airport Marathon 2014 (GCAM14) held in Queensland, Australia, on 5 to 6 July 2014. This was the first time the International Association of Athletics Foundation sanctioned the event with “gold race” status. The weather was perfect for the weekend event with sunny skies and mild temperatures as 21,147 runners participated in the various categories over the 2-day event.

Singapore was well represented with its largest ever contingent of runners this year. About 3,000 runners hailed from Singapore and other international locations. Japan showed up with the most international runners with 846 runners and China boosted its participation with nearly 5 times as many runners this year with 161 runners.

Singapore Runners Came and They Conquered

Singapore had 358 runners competing and most clocked their best ever marathon times as the event cemented its place on the world stage. Many runners were also competing in their first international marathon event. Despite the strong global competition, Singaporean runners performed very well.

It was a close shave among the Singaporean women with just minutes separating the top 3 42km winners.

Regardless of how they placed, the Singaporean runners displayed a great deal of camaraderie and sportsmanship while representing the nation’s many outstanding virtues.

Kenyan Debuts on Gold Coast with Fastest Ever Aussie Marathon

Silah Limo of Kenya was the overall race winner and finished with a record time of 2hr 09min 14secs in what he later explained to media and cheering crowd was his first-ever marathon. The 22-year-old runner is off to a conspicuous start to his international marathon career. Asami Kato, 23, finished first among all women with a winning time of 2hr 28min 51secs. She vowed to return to defend her title.

With one of the largest contingents of international competitors and many personal bests set during the race, the international event turned its notch up and left many impressed!

And What Would the Gold Coast Be Without its Surfers Paradise?

While the GCAM14 is the most popular event on the coast, another big draw to the Gold Coast is known for its surfable waves and golden sands. You don’t actually have to be a surfer to enjoy its beauty. With surfers performing off shore, many travellers and locals trickle in to watch the surfers ply their trade and take in the sun and sea along with thousands of others. Runners, yogis, sunbathers and people-watchers flock to the Surfers Paradise known for its outdoor splendor, ample shopping and other recreational opportunities.

The upbeat and energetic spirit of beautiful Queensland keeps travellers and locals coming back to both the Gold Coast and Surfers Paradise. Hence, this makes the Gold Coast Airport Marathon one of the best and most prestigious marathons in the world with increasing levels of local and international participation every year.

Do you plan to join your fellow countrymen for the 2015 edition of the Gold Coast Airport Marathon in Queensland, Australia, in 2015?

A health enthusiast, Charlotte creates beautiful content with the knowledge that she actively seeks in healthy living and clean eating. A former lecturer at Temasek Polytechnic (TP), where she passes on her skills in her profession, she is also the co-founder of this amazing running magazine.