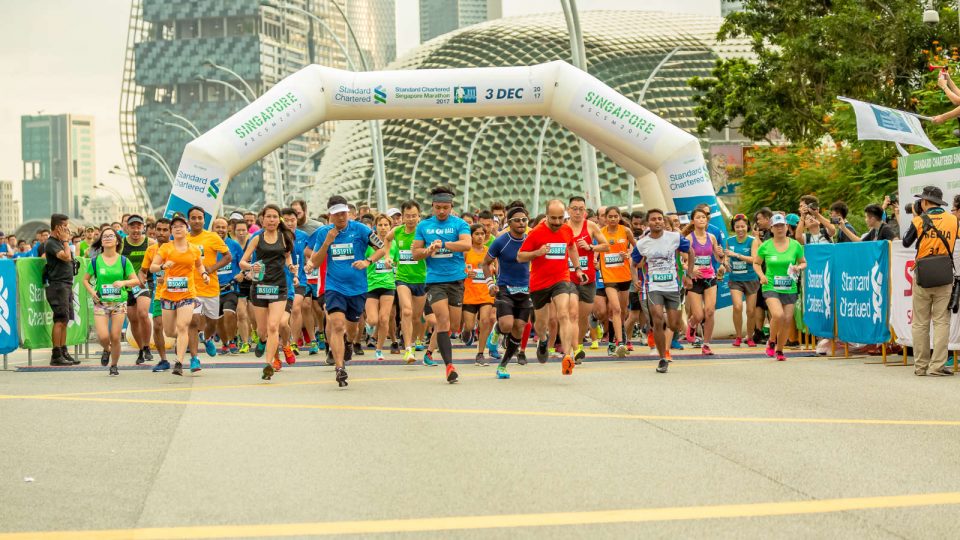 Held from 2 to 3 December 2017, this year’s Standard Chartered Singapore Marathon doubles up as National Championships. For the first time in the race’s history, all categories are sold out. There are 5 categories: Full Marathon, Half Marathon, 10km, Ekiden Full Marathon, and Kids Dash 600m.

Registration has been opened since late April 2017, however, I didn’t sign up until early November 2017. I registered for Half Marathon. During registration, I found out that my preferred size for the race tee (XS) was no longer available, so I had to settle for size S, which is too big for me. I also booked a shuttle bus ticket for S$6.48. We were given 2 choices of departure: 2 a.m. or 3 a.m.; I chose 3 a.m. so that I don’t have to wake up early.

I’m actually excited about this year’s race entitlements because for the first time ever, I would have an official race photo. I’ve never purchased any race photos in the past, so I’m glad that the organiser included race photo as part of the entitlement.

The Race Entry Pack Collection (REPC) was held from Thursday to Saturday, 30 November to 2 December 2017, at Sands Expo and Convention Centre. I collected my race pack on the afternoon of Friday, 1 December 2017. The collection process was very smooth for me, I was done in 5 minutes. However, I spent 2.5 hours at the expo because there were so many things to do.

Right after collecting my race pack, I went to the “post-it” board to check if anyone is looking for female race tee size S. Since I couldn’t find a match, I posted my requirement and contact number on the board. Sadly, nobody contacted me.

Next, I visited Under Armour and participated in their #RunWithFight Challenge, which consists of 2 stations: Virtual Race and Shot of Fame. In the Virtual Race, I had to run with Virtual Reality headset and collect all the necessary items within 30 seconds.

In the Shot of Fame, I had to take a photo with UA’s new Hovr shoes (which will be launched in February 2018) and post it to Instagram. After completing these 2 stations, finally, I could redeem a UA merchandise. I chose a headband.

I took a photo at FinisherPix booth, sampled Coffee Bandits, play Jaybird’s games and received a cap as a reward, took a photo with Toyota Harrier and received their free gifts including a Toyota tumbler, and did a health check at ActiveHealth Kiosk.

The shuttle bus departed exactly at 3 a.m. It was a double-decker SBS bus and it was a full house. I didn’t get a seat, so I had to stand throughout the journey. Despite being full, the bus made a stop at another station to pick up a few runners. Eventually, the bus arrived at Orchard and dropped us off at 3.30 a.m.

From ION Orchard, I walked from Pen E to my designated pen at Pen C. I didn’t have any baggage to deposit, so I took my time to admire and soak in the race atmosphere. Orchard Road was beautifully adorned with Christmas decorations as well as a small screen that said, “22 days to Christmas.” Then, right after the entrance of Pen C, there was a big sign that said, “Are you ready Singapore?”

At about 4.25 a.m., the National Anthem was played. Claps followed after the anthem. The elite runners were first flagged off at 4.30 a.m. Runners in Pen C, including me, were flagged off at 4.40 a.m., exactly the same flag off time as what was stated in the race handbook.

The first hydration station was located at after 2km mark. When I saw that the first table was almost empty, I immediately grabbed a cup as fast as I could, fearing that they would run out of water. It turned out that my fear was unfounded.

This year’s hydration station layout is quite different from last year’s. Last year, the tables were laid out continuously in a single line. But this year, the tables are spread over longer distance, with huge gaps after a few tables. Once I figured this out, I always grab my drink from the final set of tables to avoid the crowd.

Isotonic drinks were available not at every station, but the mineral water was. At certain hydration stations, the rubbish bins were placed between the tables, so it was convenient for runners to throw the used cups immediately.

Knowing that energy gels would be provided at 8.5km, and bananas at 10km, I decided not to bring any energy gels or bars from home to lighten my pockets. Looking back, it was actually a risky move because there’s a probability that they run out of gels or I don’t see the station. At 7.5km, I started to feel hungry and had a paranoia that I might have missed the gels at previous aid stations. Thankfully, I saw the gels at 8.5km and immediately gulped down a pack. At 10km, I grabbed a banana, held it and eventually ate it at 12km.

As I didn’t wear any headset, I was able to hear conversations around me. A man asked a lady why she ran while wearing a bag, and she said the baggage deposit queue was too long, so she decided to wear the bag and run.

During my run, I couldn’t help flashing back to my first Standard Chartered Marathon Singapore race in 2010, where I ran my first ever Half Marathon. Back then, HM race was held in Sentosa, and runners had the opportunity to run through Universal Studios Singapore.

I certainly miss running through USS and taking photos with the characters. Back then, MRT service started earlier than the usual operating hours to transport HM runners to Harbourfront Station.

However, this year’s HM is no less memorable for me than my first HM 7 years ago. Firstly, I saw a full moon, a big round bright moon early in the race. Then, as I hit the Sheares Bridge at around 6.40 a.m., dawn broke with a gorgeous twilight. It was so spectacular, I decided to stop and take photos of the stunning moment.

I returned to the road to run without looking at the incoming human traffic. I heard someone was making a sound from behind, “Tsk, tsk, tsk.” It turned out that a Kenyan runner was trying to give a signal that he’s coming my way! Luckily, he didn’t bump into me.

The uphill portion of the Sheares Bridge was brutal. But the downhill portion was awesome. As I was picking up my pace while running downhill, several rollerbladers zipped past us at the rightmost lane, one by one. They were wearing a vest with “Race Escorts” words printed on it. I immediately knew that an elite runner was coming, so I kept running to the left. However, not many runners seemed to be aware that we’re supposed to keep left when we see race escorts or lead vehicles.

And the race escorts were quiet all the time. It would have been better if race escorts could say something like, “Please keep left, thank you.” After all the rollerbladers, then came the lead bike.

A few seconds later, I heard a runner shouted, “Go, Soh, Go!” And Soh shouted back, “Keep it up, guys!” as he ran past me. I watched him run through the crowd of runners in front of me. I felt that he deserves an unobstructed road. If he had the unobstructed road, there might be a possibility that he would achieve his target of finishing under 2:34:00.

When entering the track at F1 Pit, I saw a big round orange sun on my left. It made my day. Soon after, I entered the mist tunnel but surprisingly, it didn’t have any effect on my body. The weather was hot and humid even though the sun had just risen.

Finally, it was the Esplanade Bridge. I love that I got to see a beautiful skyline of Singapore during the final kilometre. The first wave of 10km runners was flagged off as I was making the turn to Padang.

As I crossed the finish line, I heard my name being mentioned by the emcee, and it felt totally awesome. Well, the emcee mentioned other people’s names as well.

A few metres from the finish line, a volunteer put the medal around my neck. Then, I walked to the entitlement stations to collect a really cold towel (I saw the volunteer took it out from the ice container), apple, banana, mineral water and 100PLUS isotonic drinks.

The SCSM2017 app showed a notification that I finished my race in 2:45:03. I opened the SCSM2017 app to check my split timings, however, it said that it couldn’t connect to the server. My last crossed point was still 10km.

At the Race Village, there were so many photo opportunities. There was also a free massage service, but I didn’t go for it. There was a 100PLUS booth for runners who need more drink. Volunteers were giving out Standard Chartered long balloons. The board that has runners’ name were there too. It was drizzling when I was at the race village, so I quickly made my way home.