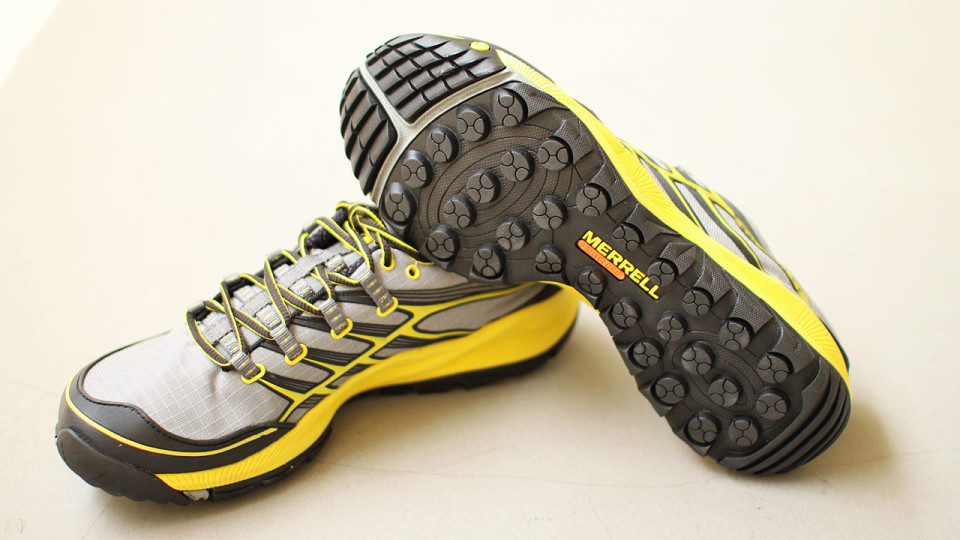 The AllOut series was designed by Merrell to strike the balance of natural movement and the necessary protection underfoot for running on trails. The AllOut Rush that I’m reviewing in particular was meant for the ultra or trail runner looking to have a shoe to go for extreme distances in trail terrain. I received a pair of Merrell All Out Rush in Wild Dove/Yellow colours. The shoes felt unassuming to me, save for the striking streaks of yellow running across the upper mesh ending with full yellow outsoles. The soles looked suspiciously thick and I was pleasantly surprised when I lifted up the shoes, they were light, weighing 263 grams per shoe (size US9).

These shoes were advertised by Merrell as having “natural shaping with a flexible underfoot wrap that creates continuous contact with the arch for increased mobility”.

Basically, I never really understood what these technical jargons meant, but when I slipped my feet into these babies and pull up the laces, I was really impressed by the snug fit of the shoes.

The mesh and TPU upper wrapped themselves comfortably on my feet, and I could not feel any annoying seams or threads that could cause potential blisters or pain. The mesh upper did its job; I couldn’t feel any build-up of heat or any potential hot spots.

Personally, I prefer shoes with a wider toe box and the All Out Rush provided that, my toes were able to move freely in the toe box and not feel pinched. The shoes wraps itself nicely on the feet and there were no significant slippage of the feet in the shoes once I had laced it up even though the shoes came half a size larger than what I usually wear.

This leads us to the next point, if there’s anything that I would like to highlight; it will be the protective toecap. I realised that had it not be for the glove like fit that restricted the movement in the shoes, I would have two bruised toes… On hindsight, it was probably luck that this pair came half size larger which fit my feet perfectly.

So now is time to see how the shoes fare in the trails. After all, being outside brings us adventure and exhilaration, a journey of discovery and freedom!

I took the shoes for a little exploratory run along the Green Corridor, a very apt name for the old KTM track. The terrain was mostly flat with some rock beds but generally it’s a hard earth trail. The initial feel of the shoes as I pitter-pattered along the pavement was that the shoes were quite stiff on the outsoles on concrete. This could be due to that the shoes have not been broken in yet.

The All Out Rush came alive as I scampered into the trail head. The characters of the shoes were now on display. Traction was good with the lugs biting into the earthen trail gripping the ground solidly. The shoes felt stable as I ran along the undulating ground, putting the shoes through its paces. I ran through the rock bed tentatively, as I wasn’t yet desperate enough to get “feet massage” (and painful bruises!) from the rocks.

Soon enough, I threw all my inhibitions out of the window. The UniFly Midsole was touted to disperse impact and stability for a solid take-off, and I am glad to report that it lives up to it.

Doing Well On The Trails

The second run with the All Out Rush was at a local favourite running spot, MacRitchie Reservoir. I started from the zigzag bridge and ended at the dam area. The shoes were very responsive as I laboured up the slopes. The lugs were providing the traction as I push myself to get over the top just to face another slope… but hey, slopes strengthens our muscles.

For those of you who have not been to MacRitchie, it’s a mixture of hard packed trail with stretches of gravel and rocks strewn path. On one path along the golf course, fine sand had been used to patch up the some of the route.

Again, the lugs did their job and I was able to push and ran through that stretch with no slipping. Along the board walk, the shoes performed as it should and no surprises in store during the last stretch.

As I bombed down the trail on the downslope, I let my legs take over while I just scanned for my next landing point, the thicker cushioning just under the heels really shone as it cushioned the impact upon landing. Overall, the All Out Rush performed as well as what it was touted by Merrell. The shoes were light and breathable, fit was comfortable and the traction was awesome.

The only missing piece if the puzzle will be how it performs on wet and muddy ground. Guess I better start to pray for rain soon!

Roy has been active in sports since young. To steal a line; partaking in sports allows him to outwit, outlast his inner demon, endurance sports especially. He used to train solo until he hooked up with Running Department and begin to appreciate the camaraderie of running in a group and of contributing back to the running community. Finding someone that shares his passion helps as well.

Be Part of the Iffley Road Legacy

What’s Up Your Sleeve? If the Answer is “My Calves,” Discover the Rockay Difference